Hamsters in the Library 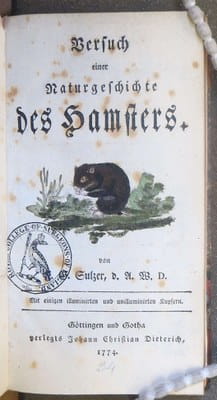 Our Collections Review project is highlighting some gems of the Library’s historical medical and surgical holdings. But it is also helping us to rediscover some more surprising items too. One such find is Friedrich Gabriel Sulzer’s 1774 work Versuch einer Naturgeschichte des Hamsters (Approach to a Natural History of the Hamster) and is the earliest known monograph dedicated to the animal.

Sulzer was a doctor and also researched zoological and mineralogical topics. A keen mineral collector, he was an acquaintance of Johann von Goethe, with whom he exchanged letters about the hobby. But aside from an essay on cattle plague, his book on the Eurasian hamster – once widespread throughout Europe – was the only thing he ever published.

The majority of this work consists of detailed descriptions of the hamster’s anatomy, appearance and behaviour. Sulzer measures every conceivable part of the hamster – inside and out. Many pages are devoted to its “exceptional fearlessness” which “does not permit him to flee in the face of any kind of danger”, with accounts of hamsters leaping into the air to attack dogs and even horses. The hamster’s aggressive behaviour and ferocious bite also feature, and Sulzer describes one leaving teeth marks in an iron bar, although he also concedes that its bite is “sharp and deep, but not especially damaging”. Earnest advice follows on the difficulty of keeping hamsters in captivity due to their tendency to gnaw through anything and everything. Looking on the positive side, he adds that hamsters are not as good at climbing as they are at biting. 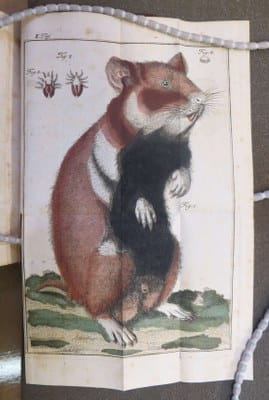 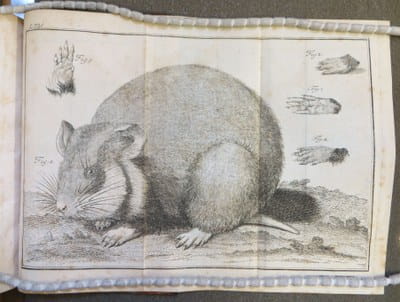 Sulzer also describes the hamster’s diet, which includes not only grain and other crops stockpiled in their burrows, but also small animals and even other hamsters. He goes on to make a balanced evaluation of the damage caused by hamsters through their destruction of crops, in comparison to their potential utility as predators of mice – which cause much more damage – and a source of fine fur pelts for clothing. Totting up his totals in Reichstaler, he decides that, financially, it makes more sense to attempt to eradicate hamsters from farmland.

Sulzer’s book was influential. Zoographies published in the following decades, many of which are also held in the RCS Library, rely heavily on it for their descriptions of the hamster. Interestingly, they tend to anthropomorphise the species to a far greater degree than Sulzer’s more objective account. In 1801, George Shaw described its “manners” as “far from pleasing”. In 1807, William Wood praised its “ingenuity”, but also called it “dastardly” and “a detestable little animal” that “does not possess one single social virtue [and] has no love but for himself”. Georges Cuvier (1827) compared its instincts to humans’ capacity for foresight, but also called it “stupid” and “cruel”. His younger brother, Frédéric, claimed the hamster is “one of the most hurtful [animals] in existence” in 1840. 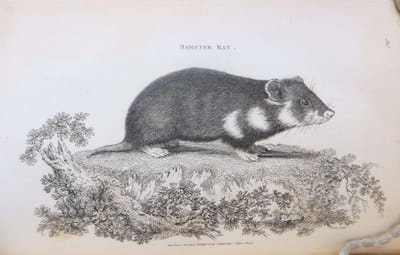 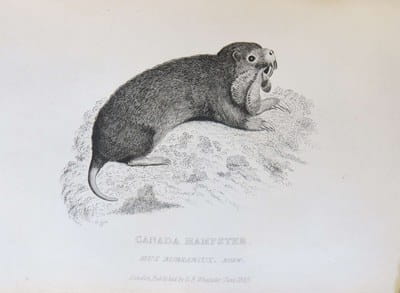 Sulzer researched his work thoroughly, and gives a list of references to the sources he used. He says that although “one occasionally finds traces of the hamster in the oldest German writing”, the earliest known description of a hamster was by Albertus Magnus, a thirteenth-century Bishop of Regensburg. Intriguingly, though, it appears Magnus was describing a species other than the Eurasian hamster. Magnus’ hamster has a white belly, like a Syrian hamster (and unlike the black-bellied Eurasian), which Sulzer simply states must be incorrect. We will probably never know if, or how, a thirteenth-century German bishop got his hands on a hamster from Syria.

Through Sulzer’s book, its references and its reception in the following century, the course of the humble hamster’s documentation provides a neat case for observing the history of scientific study, and man’s changing attitudes towards, and ideas about, the natural world. Modern mentions of the hamster in RCS Library are rather few and far between. But some things never change, and one recommendation by Sulzer echoes parents’ reproaches of their hamster-owning children for the last 50 years: if you want a pet hamster, you have to clean its cage out.