As it is William Clift’s birthday on St Valentine’s Day, we thought it was only right to acknowledge the debt of gratitude the Royal College of Surgeons of England owes to him. William Clift was the first conservator of the Hunterian Museum. Clift was apprenticed to John Hunter as an anatomical assistant, but it was also clear that he was a fine illustrator and thus Hunter employed him to make drawings and take notes.

After Hunter’s death in 1793, his vast collection was offered for sale to the government. At the request of Hunter’s widow, Clift looked after the collection in Leicester Square until 1799, when the government finally purchased it and asked the Company of Surgeons to manage it. Clift was appointed as conservator of the Hunterian Museum and under his care the collections were greatly enlarged and enriched.

Fearing for the survival of Hunter’s papers, Clift copied many of Hunter’s unpublished manuscripts. His fears were well founded, as in 1823 Hunter’s brother-in-law, Sir Everard Home, destroyed many of the original manuscripts. Due to Clift’s diligent transcriptions Hunter’s legacy survives. 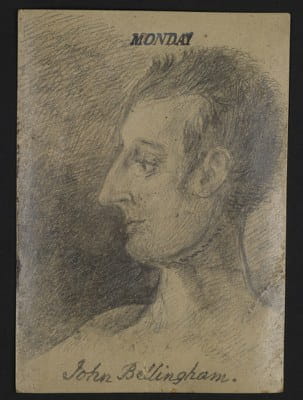 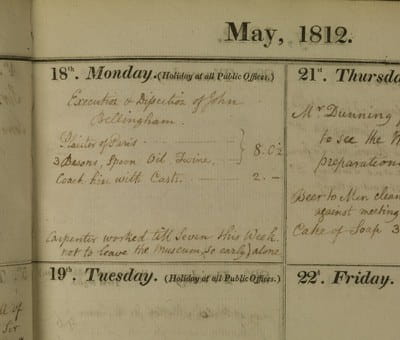 Clift was held in high esteem for his illustrative skills and was called upon by naturalists, anatomists and others to produce illustrations for their publications. This skill is evident in the “Sketches of Heads of Murderers” (those bodies which were dissected at the College), which include that of John Bellingham (above, left), the infamous assassin of Prime Minister Spencer Perceval in 1812. Clift’s diary (1811-1842) also records the execution and dissection of Bellingham (above, right). 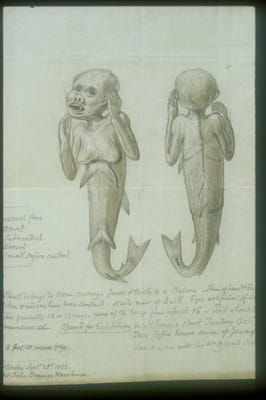 Another interesting curiosity is his sketch of a supposed “mermaid” which was displayed at a coffee house in Piccadilly in 1822 (lef).

Clift devoted his life to maintaining Hunter’s museum in the best possible state whilst bearing Hunter’s ideals in mind. He retired from the museum in 1842 and died on 20th June 1849.