History Day 2022: The Birth of Mankind: Putting the text in context

In 1540, towards the end of the reign of Henry VIII, the first edition of The Birth of Mankind was published. The time in which it appeared was one of change for the surgical profession. As D’Arcy Power puts it ‘the United Company of Barber-Surgeons grafted lectures and examinations upon the old system of apprenticeship’. Surgeons required texts from which to learn and share accumulated knowledge both classic and new.

Whereas some surgeons answering this need reprinted manuscripts which had once been the text-books of an earlier generation, others published their own current research in the vernacular, to the scandal of the establishment, who expected their texts in Latin. A further group looked to popular medical texts from other countries and translated them into English. The Birth of Mankind was one of the latter.

Above: Three of the title-pages of copies at the College, the fourth book lacks a title-page.

Originally The Birth of Mankind was based on a Latin translation of German physician and trained apothecary Eucharius Rösslin’s (d.1526), Rosengarten 1513 (the translated title is ‘the rose garden for pregnant women and midwives’), which had originally been garnered from fifteenth-century sources: a manuscript on paediatric medicine and Savanorola’s Practica Major. One can trace the development of the book from these convoluted origins to later English additions. After the German version had been a best seller there, French, Dutch and Latin versions came out, before the English followed. The new text showed how early-modern concepts about the reproductive process combined a mashup of ancient, medieval, and contemporary ideas. The advent of the printing press combined with the Protestant drive to demystify Latin texts meant that classic works that had hitherto languished in rarefied collections, read by few, were now coming to the fore. While it might seem extraordinary to modern readers, these classic texts from centuries before seemed, at the time, to be ground-breaking. Old and new thinking were entangled and unchallenged ‘free’ translations meant meanings were layered and complex.

The person who first translated and expanded the work was Richard Jonas (Hobby identifies Richard Jonas as Richard Jones, the high master of St Paul’s School in London). Jonas used the opportunity to dedicate his English work to King Henry VIII’s new Queen at the time, Katherine Howard. Katherine had not married Henry until July 1540 which helpfully narrows down the date of publication to the autumn of 1540 or the spring of 1540/1. The dedication, which refers to the Queen in glowing terms as ‘most gracious and in all goodnesse most excellent virtuous Lady Quene Katheryne’, is tactfully dropped from later editions. 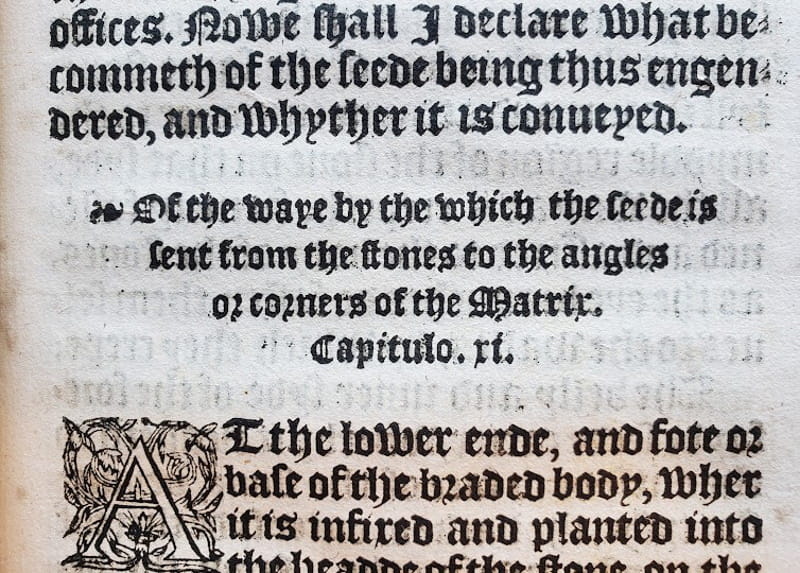 Above: A sample of the text; sperm is referred to as ‘seede’ and ‘Matrix’ is the womb.

The work influenced many other printed books of the period offering information on reproduction, fertility, pregnancy, birth, and written in an accessible, colloquial style. It also provided anatomical information and tips on parenting. As a result of it proving popular with both the medically trained and a wider audience of non-medical readers, the English work was a huge commercial success. It proved popular enough to remain in print throughout the period 1540-1654 with multiple editions appearing, some with recorded, accurate dates and some made during a period when the dates are missing or possibly inaccurately recorded. Tracing how many editions there were has proven difficult for bibliographers. One important fact that determined the multiple editions was the requirement to periodically reset the text, meaning that each page had to be laboriously put together again at the printer’s by workers called compositors, with the type arranged word by word. Power describes the convention governing the number of works printed of each edition ‘By the custom of the day every ordinary book had to be set up afresh when 1,250 copies had been struck off [printed] so that constant work should be found for the compositors’.

Text changes and what they can tell us

There were a few reasons for the different, expanded audience for the English text: one was the fact that trainee midwives in Germany and neighbouring countries were examined by physicians, whereas in England licensing was much less organised, stringent and was performed by the Church. In certain circumstances the Church allowed a midwife extraordinary rights during difficult births. For example, if a baby was not thought to be likely to live a midwife was entrusted to baptise the child not just after but during the birth. This was the only example of women being permitted by the church to carry out one of the sacraments.

The Church also required that when caesarean sections would occasionally be carried out in the period, they would only be done on a mother who had died. The only permissible reason to do this was to attempt to baptise the baby while it was still breathing. A priest would be required to certify that the woman was, indeed, dead before the surgeon could attempt to save the baby.

This very ingrained involvement of the church in midwifery had the effect of switching around the emphasis from medical to religious concerns. It also restricted the audience for the more medically skewed original text and led to the changes we see in the English one. The book did not have the guaranteed audience of the French, Dutch and German versions and as a result it was tweaked to capture this wider range of readers and the writing and terminology changed to appeal to them. The text is therefore of ‘singular and compelling interest to anyone concerned to understand how sexuality, reproduction, and the welfare of babies might have been perceived by those who lived between 1540 and 1654’ (Hobby).

In addition the book might have been more popular as a result of the innovation within it – as it is claimed that it contains the first examples of copper plate engravings in a book printed in England. Research has established links between the illustrations and those of Vesalius, Germinus and Muscio’s Genecia – a Latin version of Greek physician Soranus’ treatise on midwifery, originally written around the first century. In the case of the Vesalius additions, which were added after 1545, Hobby argues that these were popular because they offered the information contained in the more expensive and harder to obtain folio, in the form of The Birth of Mankind, which was a much cheaper quarto. 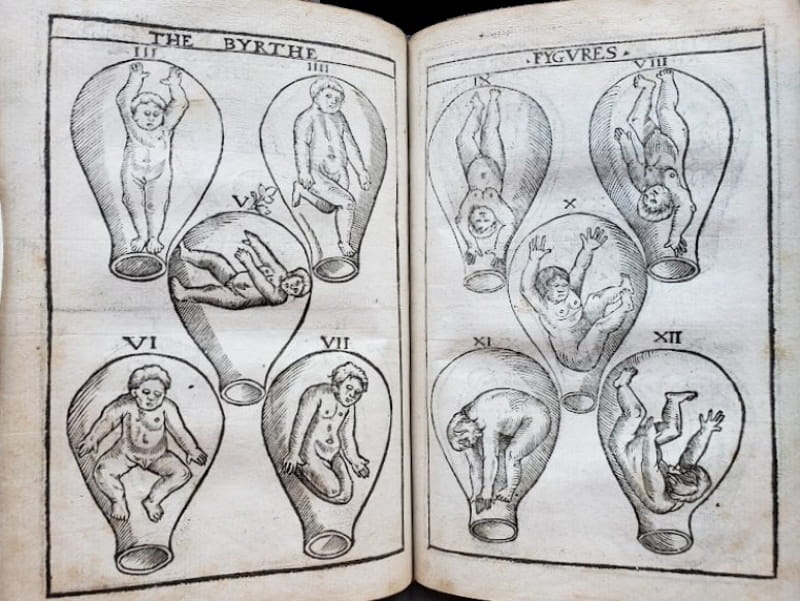 Above: Birth Figures: modern readers may find these babies oddly proportioned (and as if they are in zero gravity for astronaut training) but these images were extremely innovative and helpful for midwives when they were published.

The effort to bring the work to the press was by a printer called Thomas Raynald (active 1539–1552). Raynald was publishing before the Stationers’ Company was founded in 1556 and he lived in Finsbury in 1540, St. Andrew’s Parish in 1548 and at the star in St. Paul’s Churchyard from 1549-1557. He is also known to have had working relationships with several other prominent printers of the day: Nicholas Hill, William Hill, William Seres and Richard Jugge. The proximity of Richard Jonas, living and working within the same area may mean that Raynald commissioned Jonas to translate the Rosengarten or that Jonas approached Raynald. Either way the endeavour was successful enough to be issued at least twice in 1540 but this version did not stay as it was for long.

Thomas Raynalde, who was in charge of the 1545 edition (not to be confused with Thomas Raynald, the T.R. who printed the first three editions of the book), described himself on the title-page as a physician, which may have meant he was a Fellow of the College of Physicians, but his name is not recorded in their lists (the lists however are acknowledged as incomplete). This Raynalde expanded the text substantially to add the ‘Prologue to the Women Readers’ and a new book one which included the Vesalius images and anatomical descriptions. He also corrected errors that the non-medically trained translator Jonas had made as well as editing out or revising many of the remedies that Jonas had taken from Rösslin.

Richard Jugge and John Cawood published the 1560, 1561, 1564 and 1565 editions of The Birth of Mankind. Jugge was born in Cambridgeshire, attended Eton and went to King’s College Cambridge in 1531. His printing career began in 1547and like Raynalde he was based in St Paul’s Churchyard, later moving to Newgate market by 1573. Records show he owned two presses by 1564, and used ornamental initials that may have been originally obtained in France, given their similarity to ones used by the printer Andrew Wechel in Paris in the 1560s. Jugge was evidently well respected as he became Warden and later Master of the Company of Stationers’ multiple times and was made Royal Printer to Queen Elizabeth, along with his colleague John Cawood, in 1560. Further evidence of his liking for fancy ornamental printing is in his use of the Pelican, sometimes joined with a nightingale singing his name ‘Jug, Jug’ whilst sitting on the spray of a thornbush, in his printer’s device. 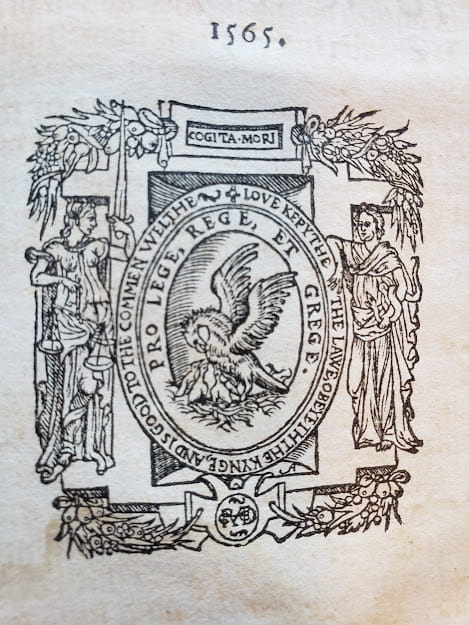 Above: Printer’s Device dated 1565 making it one of Jugge and Cawood’s.

Between 1565 and 1598 there are no recorded new editions but as Power notes ‘It is very unlikely that a popular book with a large sale should have ceased suddenly to be reprinted for thirty-three years, at a time when the population of England was increasing rapidly.’ Power theorises that Joan, widow of Richard Jugge, and her son in law, also Richard, may have been responsible for multiple undated editions between 1577 and 1580.

Thomas Dawson published the 1604 and 1613 editions of the work. He had been apprenticed to Richard Jugge from 1559-1567 and records show him as mainly being a trade printer who owned three presses in 1583, according to records at the Stationer’s Company. He was also Master of the Company of Stationers twice. 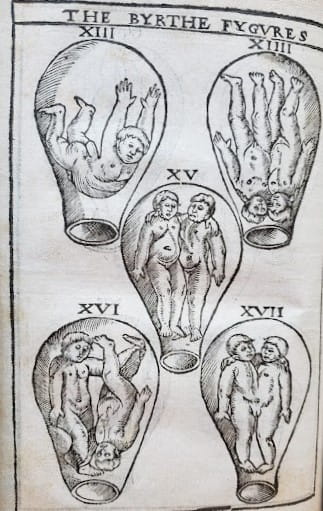 Above: More Birth Figures: note that the baby in fig. xiii is not sky diving.

Editions at the College

Power referred to the difficulty of finding an untouched original copy of the work given how popular and much used it was ‘The book had a large sale for many years and was read extensively by doctors, midwives and ladies bountiful. Perfect copies, therefore, are rare, although many still exist in a dilapidated state, title-pages gone, leaves torn out or scribbled over, and dates altered.’ The editions at the College conform to this description, coming as they do in a variety of bindings, with illustrations sometimes missing or appearing at different junctures in the text. 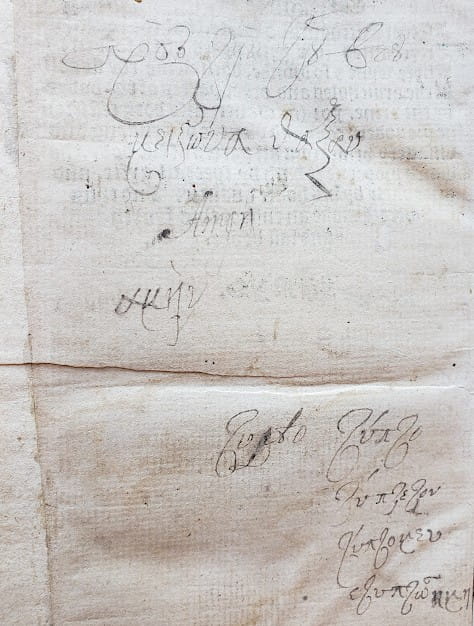 Above: Old ink notes in an expressive hand.

1565 Rebound half calf marbled boards. With diagram of a chair and some marginalia explanation. Figures iii-xii bound in at end. STC 21158.

1613 Vellum with missing furniture, possibly a clasp or tie. Presented by W. Baker with bookplate of Mr R Baker. 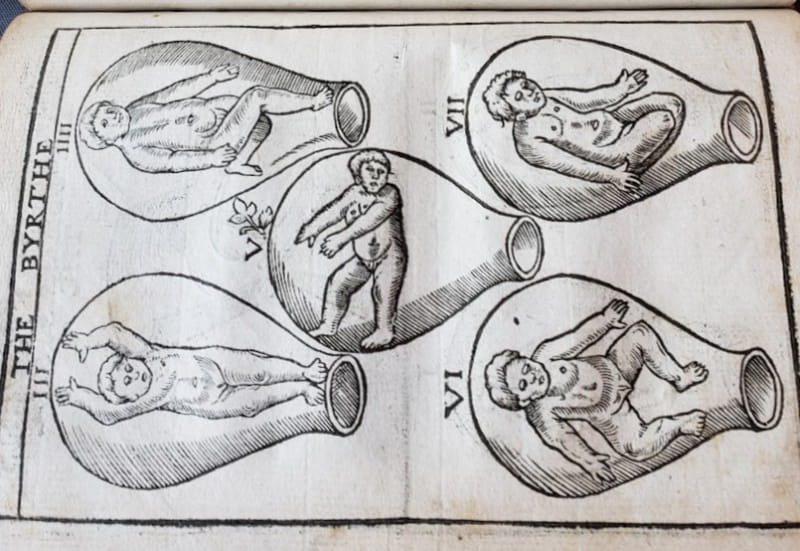 Above: Another page of the Birth Figures. The baby in Fig. V is not doing the hustle. The Birth Figures went on to be used again in the next midwifery classic The Midwives Book by Jane Sharp, 1671.