History Day 2022: Dissection and the Ressurectionists in the archives of the Royal College of Surgeons of England

Since the time of Galen the dissection, initially of animals, and later of human cadavers has been a vital element of medical and surgical education. Prior to the introduction of x-rays, the dissection of cadavers, and medical textbooks such as Vesalius’ De Humani Corporis Fabrica, was the only way to gain a comprehensive understanding of human anatomy. The Royal College of Surgeons of England’s association with dissection is reflected in the archive, in collections of William Clift, the Resurrectionist’s Diary and letters submitted by Members in relation to the Anatomy Act of 1832.

In 1745 the Company of Surgeons (the predecessor to the Royal College of Surgeons of England) was formed following the break from the Worshipful Society of Barbers. The Company was permitted to teach anatomy and build a hall with a theatre, close to the Old Bailey, so they could dissect the bodies of executed criminals. However, the hall was not finished until 1751, and by then private anatomy schools, in particular William Hunter’s school in Great Windmill Street had become well-established centres for teaching and dissection. William Hunter’s school became so successful that he requested his younger brother John to help prepare specimens and to teach students. John Hunter would later became a skilled anatomist and surgeon in his own right, becoming known as the founder of ‘scientific surgery’. Although a limited number of lectures and demonstrations in anatomy were held at Surgeons’ Hall, they could not compete with the better equipped private anatomy schools. 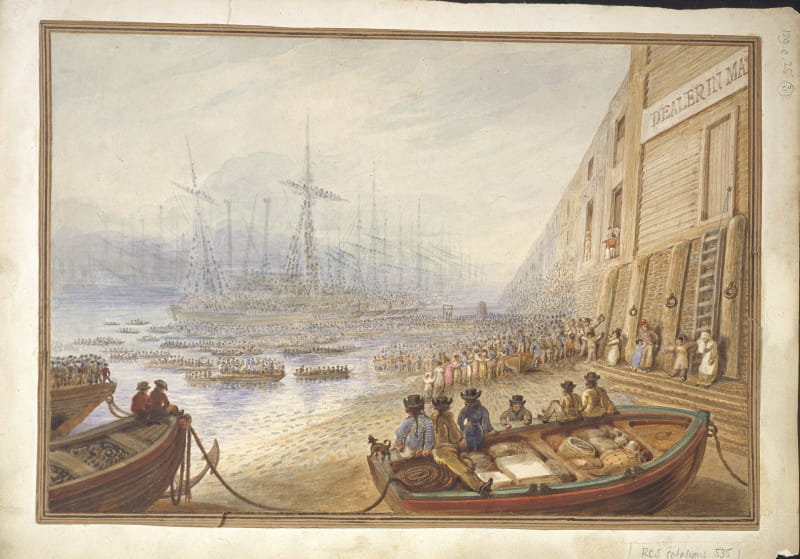 For surgeons to qualify as a Member of the Company, and later College of Surgeons of England it was a requirement that they attend live dissections. Initially a demonstrator would carry out the dissection in an anatomy theatre while a master read from a medical textbook and pointed out the features of the body, and students watched from a distance. However, from the mid 1700’s this changed, as students began to perform dissections themselves. This method of practical teaching would become an issue, as the supply of four bodies of murderers per year, as stipulated in the Murder Act of 1752, was unable to satisfy the demand of cadavers.

The increasing demand for cadavers saw a growing underground trade of bodysnatching - where the bodies of the recently deceased would be exhumed by bodysnatchers, also known as resurrectionists, which were then sold to anatomists at medical schools. In the Archives we have an account of one of these bodysnatchers operating in London (MS0024/1). 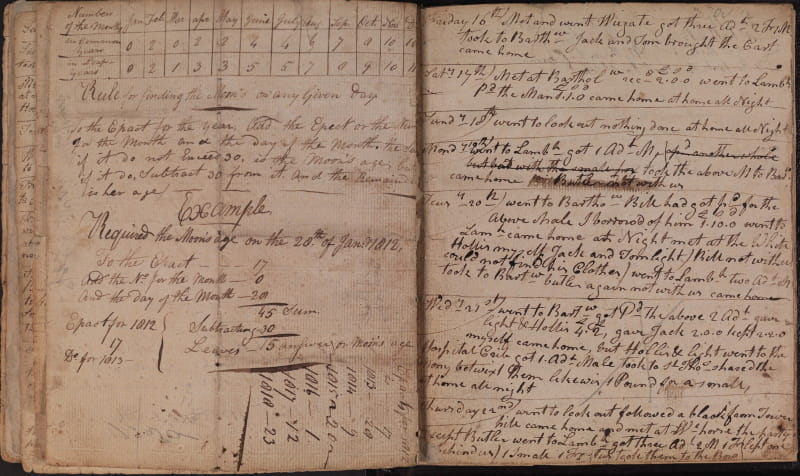 Above: The diary of a Resurrectionist, dating from 1811 until 1812, describes the bodysnatcher’s (probably Joseph Naples) activities while supplying bodies to anatomists (MS0024/1).

In 1800 the Company of Surgeons became the Royal College of Surgeons of England, and moved to our current site in Lincoln’s Inn Fields. One of the catalysts of this change was the acquisition of John Hunter’s enormous collection of over 14,000 specimens and dissections. Hunter’s collection was transferred to the College by Parliament, with the stipulation that a Museum was established to house the collection. Along with the collection, the College also hired William Clift, John Hunter’s assistant, to be the first curator of the Hunterian Museum.

One of William Clift’s duties as curator was to dissect the bodies of criminals that the College received under the 1752 Murder Act. These cadavers were dissected and prepared by Clift so that they could be transferred to medical schools, such as Bartholomew’s Hospital or Guys Hospital in order to teach medical students, or for the creation of museum specimens specifically for teaching. In William Clift’s personal paper collection (MS0007) there are his sketches of the heads of murderers, which include short pieces of text on why they were executed, and an accompanying notebook detailing the dissection in detail. 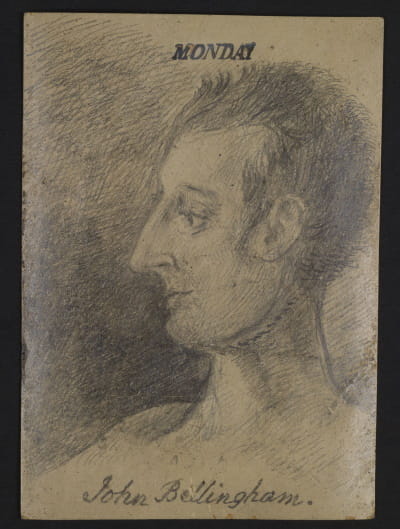 Above: John Bellingham, who was executed for the murder of the Prime Minister Spencer Perceval, the only British Prime Minister to be assassinated (MS0007/1/6/1/3). 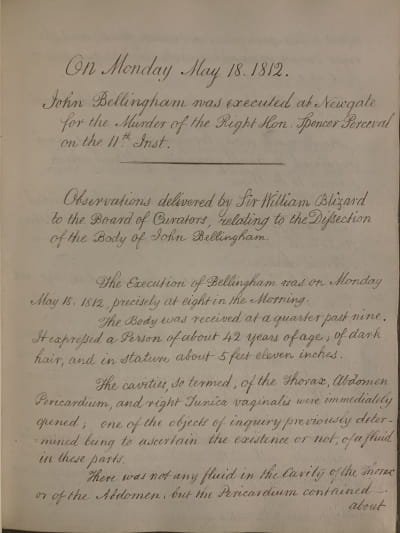 By this time, the ressurectionists were increasingly becoming a public concern. The story of William Burke and William Hare, two bodysnatchers in Edinburgh who murdered at least sixteen people in order to sell their corpses to the surgeon Robert Knox, caused public outrage. In 1831 there was a similar case of murders relating to bodysnatching that were committed in London, resulting in John Bishop and John Head (under the alias of Thomas Williams) being hanged. Ironically, Bishop and Williams were dissected by William Clift at the College, and are included in the sketches of the heads of murderers. 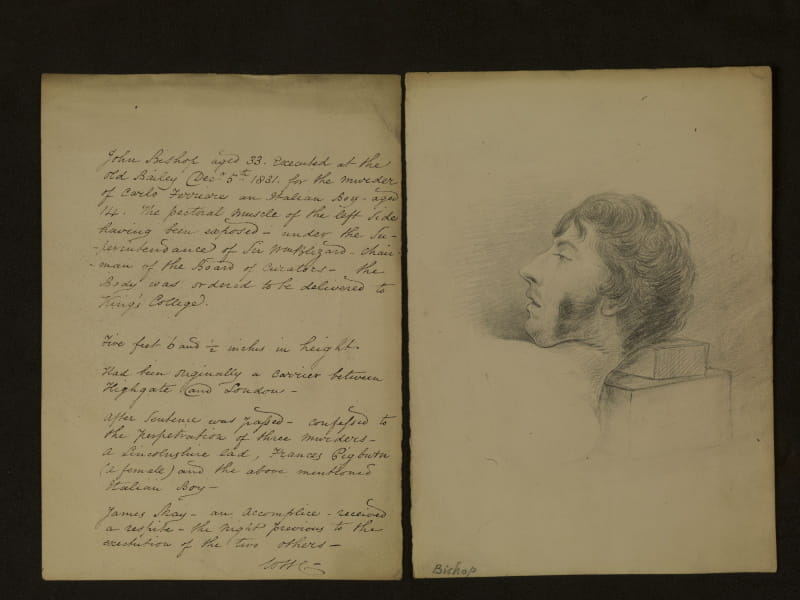 Above: The Ressurectionist John Bishop in William Clift’s sketches of the Heads of Murderers (MS0007/1/6/1/3). 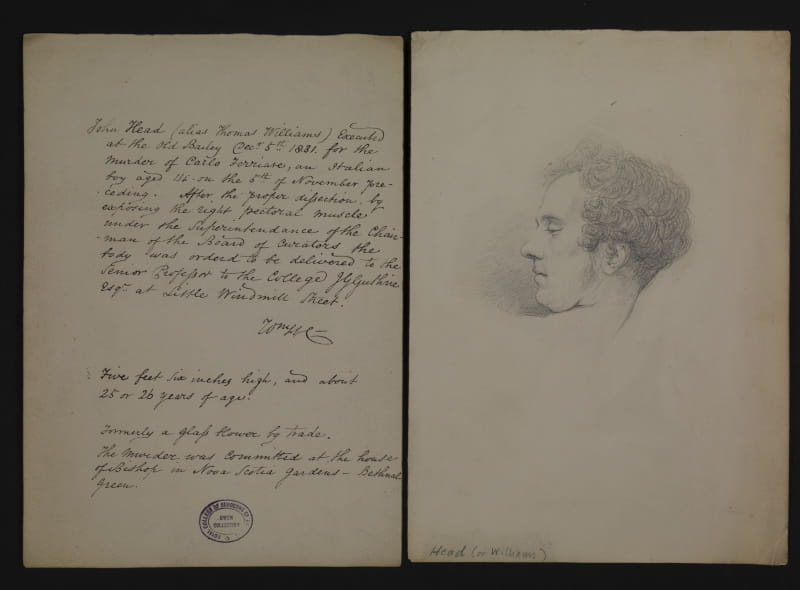 Above: The Ressurectionist John Head in William Clift’s sketches of the Heads of Murderers (MS0007/1/6/1/3).

A small collection of autograph letters (MS0540) addressed to the President of the Royal College of Surgeons of England, illustrates the stance of some of the Members of the College. Some of these Members, including Erasmus Wilson, Richard Partridge and John Erichsen raised concerns about the limited supply of cadavers and the implications that this would have on surgical education.

Following the public concern over the ressurectionists the Anatomy Act of 1832 was passed. The Act allowed surgeons and students to dissect bodies that were unclaimed after death, many of these had died in a workhouse, prison or hospital, with the passing of this bill effectively cutting off the bodysnatching trade.