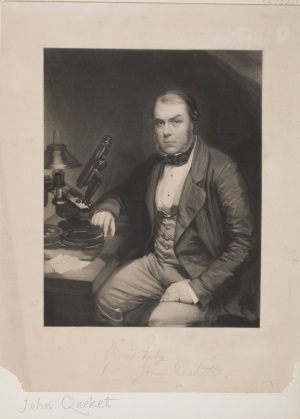 John Thomas Quekett is most famous for his pioneering work in microscopy. He was born in Langport, Somerset, in 1815 and was educated by his father, expressing an interest in microscopes from an early age. Choosing to enter the medical profession, he first became apprenticed to a surgeon at Langport before moving to London as apprentice to his brother Edwin. He studied at the London Hospital Medical College, and at Kings College, qualifying in 1840.

The Royal Microscopical Society was founded in 1839 in the house of Quekett’s brother Edwin, and John was Secretary of the society from 1841-1860. A new society in London was later named the Quekett Microscopical Club in his honour.

Quekett won a three-year studentship in human and comparative anatomy at the Royal College of Surgeons of England, and it was during this period that he made his microscopical preparations. He was appointed Assistant Conservator of the Hunterian Museum in 1843, and then Conservator when Richard Owen moved to the British Museum, in 1856. 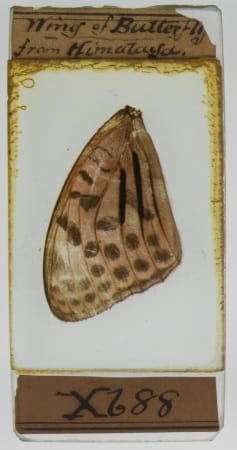 The College purchased his collection of 2,500 microscopical preparations in 1846. He became Professor in Histology at the College in 1852, and also instructed Prince Albert on the use of his microscope. He was elected to the fellowship of the Linnean Society in 1857 and of the Royal Society in 1860. He died at Pangbourne, Berkshire, in 1861.

After his death his possessions, including microscopes and other scientific equipment, were auctioned, and an annuity was paid to his widow by the College, with a fund being set up to assist his family.

For more information on Quekett, see our previous posts: Professor Quekett and the Curious Case of the Coal slides, Imaging Quekett’s bone slides: the origin of specimens, A Very Large Collection of Very Small Things and Quekett and Exploration.