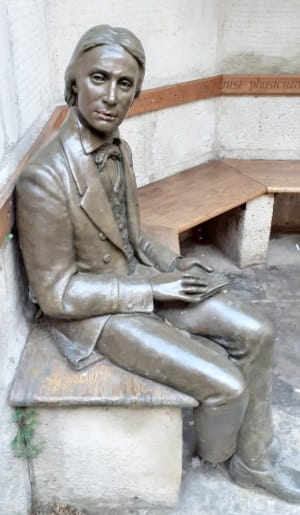 On Sunday 1 October 1815 the young, would-be poet John Keats registered at Guy’s Hospital to study medicine; a little more than a year later, and having published just one poem, he decided to abandon his medical studies, informing his exasperated guardian sometime after his 21st birthday on 31 October 1816 of his decision to follow a literary career.

Keats apparently enjoyed his time as a student. Dressing ‘à la Byron’, “He developed a taste for claret, snuff and cigars; he learned to play billiards and whist; he went to boxing matches, cockfights, and bear-baitings” (Motion, 1997, p.90), but how seriously did he take his medical studies? Did he ever intend to qualify? His small, chaotic medical notebook, recording lectures by the eminent surgeon Sir Astley Cooper, and now in Keats House in London, gives some clues.

Keats was apprenticed to the apothecary Thomas Hammond in Edmonton in the autumn of 1810, at the age of just 14, and finished his apprenticeship in 1815. In the same year, the Apothecaries Act was passed, requiring would-be apothecaries to study at a hospital for at least six months and to pass a new licence overseen by the Society of Apothecaries. Keats signed up to attend Guy’s for a full year, showing he intended to take the new apothecaries’ licence and then, after further study, the membership of the Royal College of Surgeons.

Guy’s was linked to the older medical school at St Thomas’s Hospital (as the United Hospitals). In 1816, Sir Astley Cooper delivered his lectures at St Thomas’s between 1st January and 1st June. They were also attended by Keats’ fellow student, Joshua Waddington, whose notebook is now in the King’s College archive. Waddington, who had been apprenticed to his uncle Daniel Jarvis in Margate, registered at Guy’s just five days after Keats. His notes, donated by his son in 1899, are bound in a brown leather binding, the title page written out neatly in large, bold writing, the rest of the text evenly spaced and level. Waddington seems not to have missed a lecture, and clearly took Cooper’s advice, given in his introductory session, to take short notes in the lectures and then write them up afterwards. Waddington the exemplary student passed his MRCS on 1 November 1816.

Above: a page from Keats’ notebook. Courtesy of City of London, Keats House, Hampstead.

In comparison, Keats’ notes seem haphazard and idiosyncratic. Written in a small leather-bound notebook, his name written neatly inside the cover, the anatomy notes are generally neat and structured, but the physiology pages appear to have been written quickly, the writing sometimes sketchy and at an angle, with abbreviations and spelling mistakes. Keats also seems to have missed several of the lectures and the sequence is non-linear: the first four lectures are recorded at the beginning of the book, the next 12 at the end, and other lectures are fitted in throughout the book, where there is space. Keats has also drawn doodles in the margins – of flowers (near a description of how to treat a dislocated jaw), fruit and skulls.

The notes seem to confirm the impression given by his contemporaries that in lectures Keats’ mind was on poetry rather than surgery. Walter Cooper Dendy remembered Keats “in a deep poetic dream” and later produced a “quaint…fragment” he claimed Keats had written “while the precepts of Sir Astley Cooper fell unheeded on his ear”. Henry Stephens recorded:

In the lecture room he seemed to sit apart and be absorbed in something else, as if the subject suggested thoughts to him which were not practically connected with it. He was often in the subject and out of it, in a dreamy way. 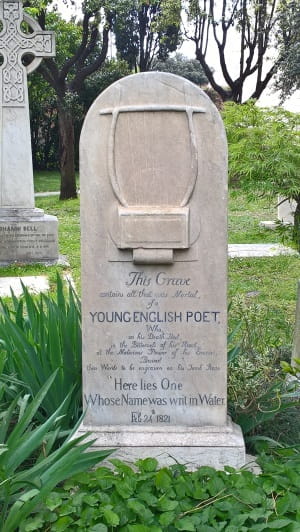 But these memories could have been influenced by Keats’ subsequent fame as a writer, memories re-remembered and reconfigured in terms of the Victorian stereotype of the dreamy, distracted Romantic poet. But, individual and scatty though they were, Keats’ notes were effective: he took the examination for the licence of the Society of Apothecaries on 25 July 1816 in Blackfriars, passed all four papers and qualified as an apothecary at the age of just 20 – in the quickest possible time. He spent a few months continuing as a dresser for William Lucas junior and then left the United Hospitals before he could take his MRCS, seeming to leave medicine behind.

But, arguably, he never quite left science or his vocation to heal. The medical notebook shows he brought his unique, inventive, mind to his medical studies, but he later took his scientific learning to his poetry. His biographer, Nicholas Roe, argues that his knowledge of anatomy and physiology gave him a new, rich, vibrant vocabulary; Andrew Motion shows how he was deeply influenced by Astley Cooper’s empiricism, by the surgeon’s insistence that knowledge can be only gained through observation. Keats – poet, dreamer and healer – was attentive at his lectures after all.