Joseph Lister was born in 1827 and trained at University College Hospital in botany, surgery and medicine. As a Quaker, it was the only university he was eligible to enter. After qualifying as a surgeon he went to Glasgow, becoming a Professor of Surgery in 1860. He moved to Edinburgh in 1869 where he worked with James Syme, the Professor of Clinical Surgery, later marrying his daughter.

At that time putrefaction commonly followed operations. A common surgical report was “operation successful but the patient died”. Approximately 1 in 4 patients died on surgical wards from infection, and all surgical wards were recognisable by the smell of putrefaction. Lister read the work of Louis Pasteur on the cause of fermentation of beer and milk being due to living organisms. He realised that this might also be the cause of putrefaction in wounds. After learning that authorities in Carlisle were using creosote to treat smelly sewage, which had not only reduced the odour, but reduced disease amongst cattle and humans, and knowing that the active ingredient was carbolic acid, he started a series of experiments.

He used dressings soaked in carbolic acid to cover wounds and the rate of infection was vastly reduced. Lister then experimented with hand-washing, sterilising instruments and spraying carbolic in the theatre while operating, in order to limit infection. These experiments resulted in the development of the carbolic spray and the antiseptic treatment of wounds, which greatly improved survival rates on the surgical wards. He published his results in The Lancet in a series of six articles, running from March through July 1867. Lister reported that his surgical wards had remained free of sepsis. Between 1864 and 1866, before the use of antiseptic treatment, 46% of Lister’s surgical patients died. In contrast, from 1867 to 1870, only 15% died. 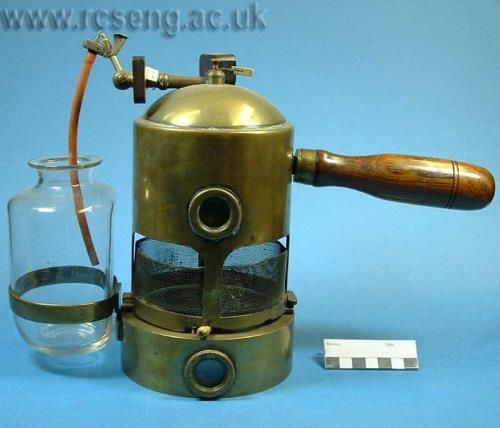 His work was accepted in Germany but denigrated in London. Lister felt it was his duty to demonstrate his work to the widest possible audience and accepted a post as Professor of Clinical Surgery at King’s College Hospital in 1877. He brought his house surgeon, Watson Cheyne, three senior students and a nurse from Edinburgh to ensure the success of his work; due to a series of misunderstandings, however, he started in a hostile environment. His teaching was finally accepted after his successful ‘open’ operation for fracture of the patella (kneecap). The patient was Francis Smith, who had fractured his patella a fortnight earlier. Lister wired together the separated fragments of bone, a process so complex that this acted as a demonstration of how the antiseptic system “had removed for ever the threat of hospital disease”. Smith not only survived the operation, but he walked out of the hospital 3 months later. As Lister’s fame spread, visitors flocked to the hospital to watch him operate and notices were displayed in three different languages requesting no smoking in the hospital. By 1893, he was universally acclaimed and honoured for his work, being created a Baronet in 1883. Lister remained at King’s College Hospital for sixteen years, retiring in 1893 when his wife died. He was the first surgeon to become a peer, being created the 1st Baron Lister of Lyme Regis in Queen Victoria’s Jubilee Honours list of 1897.

Lister’s work was an inspiration to others. Joseph Lawrence, a chemist living in Missouri, developed an alcohol-based formula for an antiseptic mouthwash in 1879 that he named “Listerine” in his honour.

His antiseptic method increased the safety of operations and laid the foundations for all of the subsequent advances in surgery. His principle that bacteria must never gain entry to an operation wound remains the basis of surgery to this day, saving countless lives.