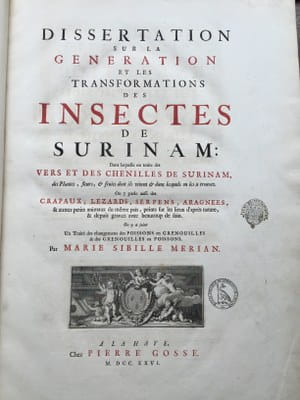 Maria Sibylla Merian (1647-1717) was the daughter of Matthaeus Merian the Elder (1593-1650) the celebrated engraver, publisher and topographical artist. From an early age she showed a great interest in natural history and, at 13, she began her studies of insects with silkworms. She was, at the same time, developing her artistic skills and had mastered engraving at the age of 11.

She married a fellow artist in 1665 at the age of 18 and continued her flower studies mixing most of her paints and dyes herself. Her first daughter was born in 1668 and her second in 1678. She published a book of flower paintings in 1675 but it was in her second book, published in 1679 under a title which translates as The wondrous transformation of caterpillars and their remarkable diet of flowers, that she developed her definitive style. Her work, though appreciated in her lifetime, fell between the two worlds of art and science. The art critics praised her talent and her technique but disliked the textbook style of arrangement while the scientists wanted more formal structures and labelling. It has also been suggested that they might have taken her more seriously had she been a man!

In June 1699, Maria Sibylla Merian went to Surinam to study its superb natural history. She had lived in a Labadist community in Friesland in the 1680’s and had seen the glorious butterflies and caterpillars that their missionaries had brought back. It was, of course, an extremely hazardous trip in those days, especially for what was considered to be an elderly woman (she was 52). 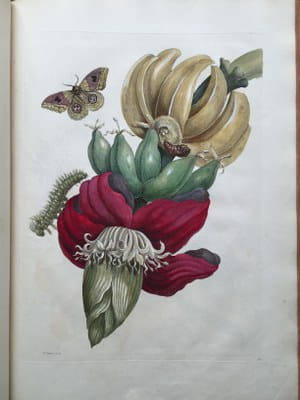 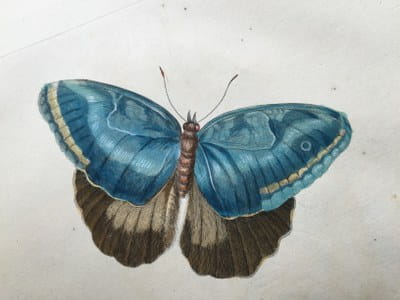 After spending some time in Paramaribo she went into the jungle – four days rowing upstream on the Suriname River. She stayed there with a family of Dutch settlers gathering caterpillars and their host plants, breeding them and making intricate paintings on pieces of vellum of the various stages of their metamorphosis. After only 21 months she became ill and then returned home but she had enough material in her notes and studies to eventually produce the beautiful work from which the images are reproduced. This superb volume with 72 carefully engraved, hand-coloured plates was first published in 1705. Maria Sibylla Merian died in 1717 having just sold 254 of her original paintings to Czar Peter the Great. Her name is engraved on the facade of the University of Amsterdam along with those of 35 men of science. 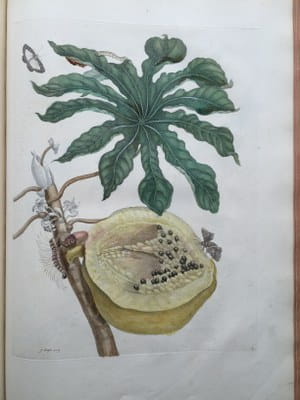 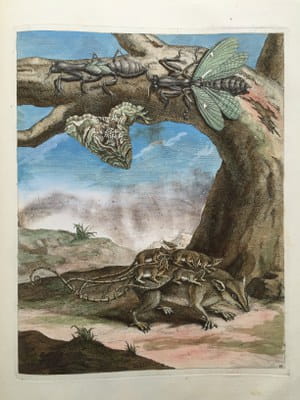 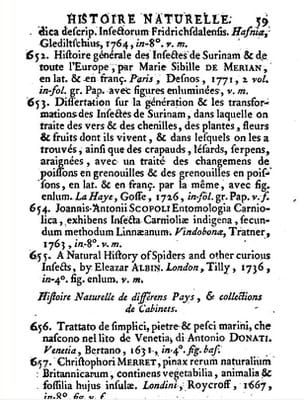 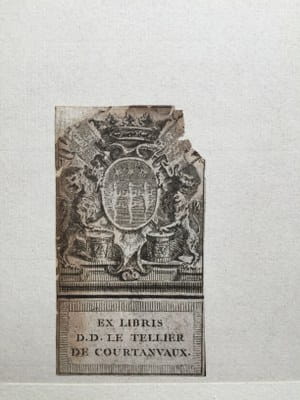 François-César Le Tellier (1718-1781), Marquis de Courtanvaux and of Louvois, was president of the Académie des Sciences. His son, Charles-François Le Tellier (1734-1765), Marquis de Montmirail and previous president of the Académie, had begun collecting travel books with the intention of creating a complete bibliography of scientific exploration but his untimely death at the age of only 31 prevented him from completing his project. His father not only retained his collection, but greatly expanded it with first-rate acquisitions and so he soon established an unrivalled library of travel literature and global scientific discovery. On the death of the Marquis de Courtanvaux in 1781, his library containing 3,599 books was put up for sale, and the Parisian bookseller Jean-Luc III Nyon, known as Nyon the Elder, was commissioned to print a complete catalogue which appeared in 1782. Many of the books were acquired for the French Royal Library and can today be found in the Bibliothèque Nationale de France. Nyon’s catalogue lists Merian’s Insectes de Surinam as number 653, giving us strong reason to believe that our copy was once part of one of the most splendid 18th century libraries, that of the Marquis de Courtanvaux.

(Some of the content of this article was taken from the Bulletin of the Royal College of Surgeons of England, 2000, Vol. 82 No. 7 and 8.)