Murder in the East End: the Wainwrights Trial 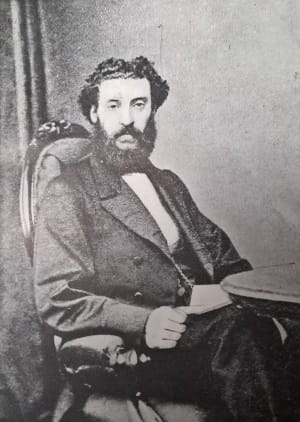 The ‘Whitechapel tragedy’ was sensational, with the murder trial widely covered in the Victorian press. Frederick Larkin was the surgeon who carried out the post-mortem examination of the victim and his accurate evidence was largely responsible for Henry Wainwright’s conviction for murder.

Henry Wainwright was a respected business man running a brush-making business in London’s East End. He was a popular man, married with four children and living a comfortable life, but he had secrets.

Wainwright met and fell in love with Harriet Lane, an apprentice milliner, in 1871. She was described as a “lively little woman with pleasing manners and a love of finery”. By the following year, she had become his mistress and over the next two years they had two children, but by 1874 things were turning sour. Wainwright’s business was failing and his debts were mounting. Harriet liked a drink and continually demanded more money, threatening to expose their affair. 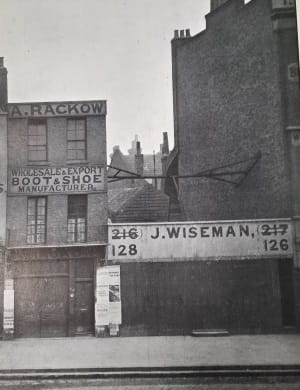 Wainwright had to do something. He persuaded his brother, Thomas, to woo her by letter using a pseudonym, eventually offering marriage. On Friday 11th September 1874, Harriet, dressed in a grey dress with jet buttons, bonnet and cape, left her children in the care of a friend and vanished. Later that day, men working near Wainwright’s warehouse thought they heard three gunshots. They briefly searched around but didn’t find a cause.

Wainwright’s financial problems didn’t improve and the Whitechapel warehouse had to be sold. People in the area had noticed an obnoxious smell around the building. On 11th September 1875 Wainwright entered the warehouse and dug up a shallow grave. He proceed to dismember the body in it and wrapped the pieces in cloth to make two heavy, foul-smelling parcels. He asked an ex-employee, Alfred Stokes, to help him move them. While waiting for Wainwright to get a cab, Stokes opened one. He was horrified to see a human head. Quickly repacking the parcel, he helped load it into the waiting cab and then pursued the cab on foot. He begged two police constables in Leadenhall Street to stop the cab, but they laughed at him saying “Man, you must be mad”. He continued running after the cab until he was able to alert two more police constables who accosted Wainwright. After seeing the contents of the parcels, they arrested Wainwright who attempted to bribe them.

Larkin was called to see the remains at St Saviour’s Mortuary, the first of a number of examinations of the body to gather evidence and identify it. Wainwright had covered the body in lime chloride which had the unforeseen effect of preserving the body. Larkin and fellow surgeon, Thomas Bond made careful notes at all stages of their investigations. They carried out a forensic examination of the skull to trace the path of the three bullets and described how the throat had been cut after the shots had been fired. The age of the body was determined by close study of the wisdom teeth and measurements were made to determine height and shoe size. Great attention was paid to determining whether the woman had been a mother. The surgeons found a distinctive scar below the right knee which was a key piece of identification evidence. Larkin provided descriptions of how the hair was arranged over a velvet pad with numerous hair pins, a style Harriet was known to favour. 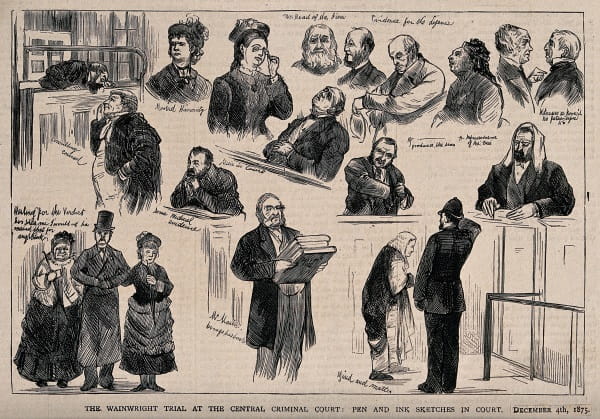 Image: “Scenes from the Wainwright trial at the Central Criminal Court in December 1875. Wood engraving, 1875.” From Wellcome Images, via Wikimedia Commons, licensed under the Creative Commons Attribution 4.0 International license.

The evidence from Larkin and Bond fills sixteen pages in Irving’s Trial of the Wainwrights. In the copy held in the RCS Library, Larkin has added a manuscript note to say that Judge Cockburn had “expressed his high appreciation of the services of the two medical witnesses on behalf of the Crown” and awarded them a special fee of five guineas for each day they attended the Old Bailey.

Henry Wainwright was executed at Newgate Jail on 21st December 1875. His brother was sentenced to seven years penal servitude as an accessory to the murder. Alfred Stokes received a thirty pounds reward.

A full account of the trial can be read in the Proceedings of the Old Bailey.