Murder in the medical school: the Parkman-Webster case, Boston 1849-50

Among the first US trials to allow scientific evidence as testimony, and the first to allow dental evidence, was that of John White Webster for the murder of George Parkman. The episode continues to intrigue due to an inherently challenging investigation and the peculiarities of the trial.

In December 1849, thousands are said to have lined the streets of Boston to witness the funeral of George Parkman. An interesting man, he came from one of the most celebrated families in the City and had been a doctor, a benefactor and had held a vast property empire and a large fortune. The city was in uproar because Parkman had first disappeared, causing a media sensation, before parts of his body were discovered in Harvard Medical School a week later, in the building where doctors came to dissect and anatomise human bodies. 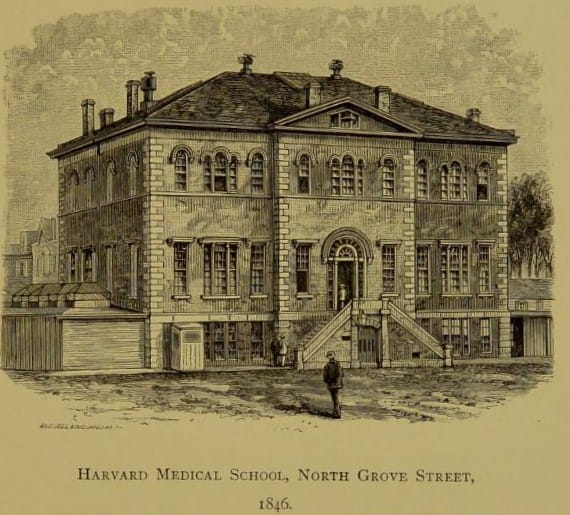 Parkman’s remains had been dismembered and burned, but now all the medical and forensic expertise of Harvard’s medical elite came together to start the process of trying to find out what had happened to him and who might have performed such shocking and grisly acts.

According to an account by Reece in Principles of Medical Jurisprudence:

…the portions of the body were accurately examined by a skilled anatomist. It was proved that they were human remains, belonging to one and the same body, of the male sex, and that they had not been dissected for anatomical purposes… On restoring these disjointed parts in situ… it was found that the proper measurements agreed closely with those of the missing Dr. Parkman.

The body was also found to bear “certain marks of identity about the teeth and jaws”. The testimony of Dr Keep (above), Parkman’s dentist, was particularly charged when he began to cry whilst matching a cast of Parkman’s jaw with the teeth recovered from the Medical School furnace. Litch’s The American system of dentistry, also mentions the case.

Gradually the focus of suspicion fell on one of Parkman’s colleagues, also a doctor, John White Webster. Webster was a lecturer in Chemistry for the Medical School, who had a laboratory in the basement of the building where Parkman’s remains had been uncovered. Added to this, the investigation exposed Webster’s dire financial circumstances: the fact that he owed Parkman close to $500 (approximately £12,500 in 2019) and had arranged to meet him at his lab on the day of the murdered man’s disappearance. The circumstantial evidence seemed to point very clearly to Webster. 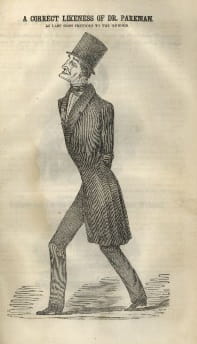 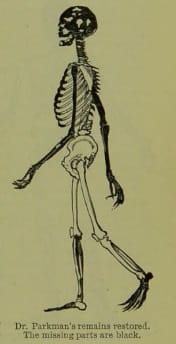 First image: a sketch of Dr. Parkman from the New York Globe newspaper (via the US National Library of Medicine). Second and third images: illustrations based on anatomist Dr Jeffries Wyman’s diagram, shown at the trial, of the skeletal remains found in the furnace; the stance of the skeleton is similar to the well-known sketch of Dr Parkman and could arguably have influenced the jury (from The principles and practice of medical jurisprudence, 1905, and Principles of forensic medicine, 1875, both at the UK MHL).

A trial followed in March 1850, which attracted extraordinary interest from the public: seats in the court room had to be replaced with bleachers to accommodate crowds with tickets, who were ushered in for a short portion of the trial (some accounts say 10 minutes) and then replaced with the next group. In this way thousands of people witnessed the ground-breaking evidence unfold. Correspondents from newspapers as far away as London, Paris and Berlin made daily reports on the progress of the case.

Forensic evidence was used to back up both sides during the court proceedings, but the fact that the defence concentrated on casting doubt that the body was Parkman’s, whilst at the same time arguing that he had been harassing and bullying Webster in an attempt to recover the loaned money, weakened their position. At the time, the accused could not be called to testify. Webster was convicted and hanged in August 1850. He always maintained his innocence.

Over the years, the trial outcome has been questioned by some, claiming that the janitor who discovered the body, Ephraim Littlefield, might have had equal opportunity and a motive - the large reward for information offered by Parkman’s family that he retired comfortably on - to kill Parkman and pass it off as Webster’s crime.

Further weight might be given to this theory, when considering that Littlefield also lived in the basement beside the lab and had access to all of the areas used to hide parts of the body. Littlefield was also known to supplement his income by obtaining corpses for dissection at the medical school for $25 a body. Furthermore, much of the evidence for the prosecution’s version of events emanated from Littlefield’s mostly-uncorroborated account of the days after Parkman’s disappearance.

The trial had not scrutinised any of these facts. An exhaustive account of the case can be found in the 669 pages of Report of the case of John W. Webster…. UK MHL items, some of which are digitised RCS Library copies, also mention the case.