Walking to work this week, I spotted an English Heritage blue plaque on the wall of number 65, Lincoln’s Inn Fields. It commemorates William Marsden (1796-1867), a surgeon who lived in the house and founded both the Royal Free and Royal Marsden Hospitals. 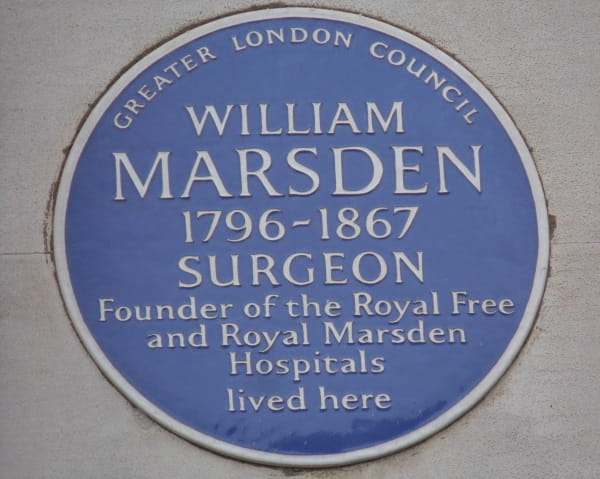 Born in Yorkshire in 1796, William Marsden was apprenticed to an apothecary before moving to London to study surgery under John Abernethy at St Bartholomew’s Hospital, gaining his MRCS in 1827 to become a fully-qualified surgeon. Later that year while walking home, he found a young girl almost dead from starvation and disease on the steps of St Andrew’s Church in Holborn. Marsden tried, but failed, to find hospital treatment for the girl, who died two days later. At the time, admission to hospital was only possible with a letter from a hospital governor. The power of admission was effectively controlled by the rich supporters of the hospital. 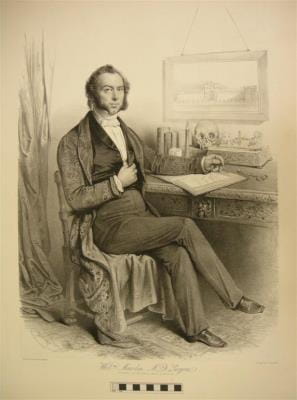 This was a turning point for Marsden. The following year he opened the London General Institution for the Gratuitous Cure of Malignant Diseases in Hatton Garden, which became known as the ‘Free Hospital’. Treating anyone, irrespective of their ability to pay, must have seemed revolutionary at that time. Marsden was 32 years old.

The dispensary treated all diseases and conditions, including cholera during the 1832 outbreak. This was unusual: no other hospitals admitted these patients and Marsden became a leading authority on treating the disease. William IV became a patron of the hospital in 1835 and Queen Victoria granted it a royal charter in 1837. The hospital was renamed the Royal Free, moving to larger premises at Gray’s Inn Road in 1843. 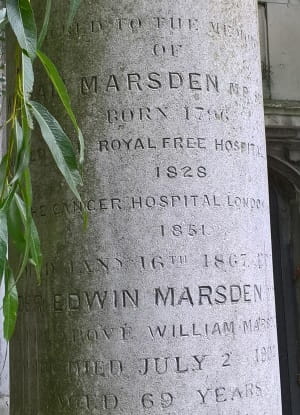 Marsden’s wife Elizabeth-Ann died of cancer in 1846 and this was another turning point. He opened the Free Cancer Hospital in a small house on Cannon Row, Westminster, for cancer patients in 1851. Initially a dispensary prescribing drugs to treat patient’s symptoms, it was quickly realised that some patients needed hospital care. New premises were found in Brompton on the Fulham Road. The hospital was renamed the Royal Marsden Hospital in 1954.

Marsden died in 1867 and this year marks the 150th anniversary of his death. His obituary (note that only the first page is free to access) in the BMJ talks of his “remarkable energy, foresight and boldness”. He had been a visionary who was able to make a practical difference to many lives. He is buried in West Norwood Cemetery where his surgeon son, Alexander Edwin Marsden, is also commemorated.