Percy Furnivall the cyclist and an early training regime 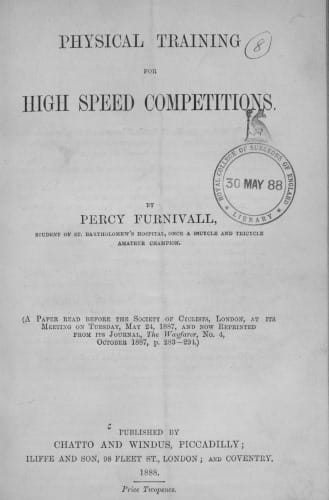 Cycling is today a highly competitive, Olympic sport, with medal winners following complex, scientifically regulated training plans. Back in the late 1800s, when bicycles (and tricycles) had just been invented and racing newly introduced, there was a similar desire to reach ‘peak performance’. Physical training for high speed competitions (1888), a pamphlet of a talk given by Percy Furnivall, was an early attempt at outlining an optimum training regime.

Furnivall was an early star of the sport. The son of Frederick James Furnivall, one of the co-creators of the New English Dictionary, and Eleanor Nickel Furnivall née Dalziel, he began to cycle while he was still a schoolboy and continued as a medical student at Barts. In 1885, he broke the one-, two-, three-, four- and five-mile tricycle and tandem records, and was the winner of 11 prizes on an English tour of America. A year later, he was the one- and five-mile bicycle champion, and in 1887 became the holder of the record for the quarter mile bicycle race. He qualified from Barts with the conjoint examination in 1892, gained his FRCS in 1895, and in 1899 was elected to the staff of the London Hospital. 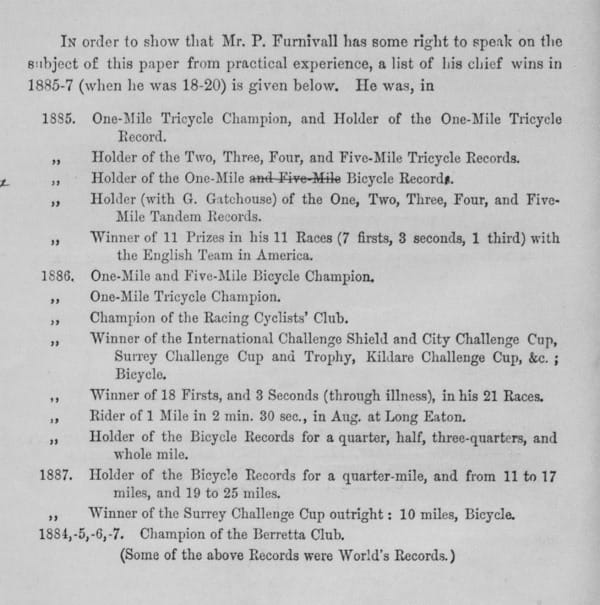 Furnivall outlined his fitness regime in a talk given to the Society of Cyclists in London on 24 May 1887, when he was still a medical student. From the beginning, he stresses the “scientific” nature of his plan. He gives a summary of the physical characteristics of the fit cyclist. The bicyclist – Furnivall assumes all competitive cyclists are male – is of above medium height, with wide hips, long legs, powerful thighs and “with a chest big enough to give full play to his heart and lungs”. The tricyclist, on the other hand, will be shorter and thick set.

Diet forms an important part of his (rather puritanical) regime. He suggests “Organic nitrogenous: as flesh of animals, fish, milk, eggs, and leguminous fruits. Carbo-hydrates: bread, vegetables, non-leguminous fruits. Substances supplying principally fatty bodies: butter, lard, suet.” Food should be plain and simple. No pickles or sauces are allowed (they might stimulate the appetite). Stale bread is recommended (it is easier to chew) and, naturally, “neither alcohol nor tobacco should be touched”. 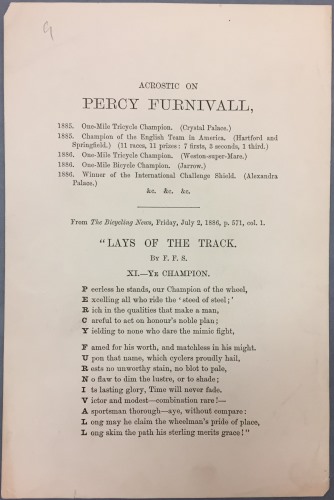 Competitors must ensure they have adequate rest, sleep having “…a good effect, not only in sustaining the strength, but in keeping the senses of seeing, hearing and feeling in steady and healthful tone.” Clothing for races should be woollen and porous “…the form as thoroughly adapted as possible not to catch the wind, and yet to leave all the joints free play”. Exercise in addition to cycling is encouraged, though, confusingly, it “ought not to weary the lower limbs”.

Much of the pamphlet discusses tactics during races, prefiguring the modern-day interest in the psychology of sport. He concludes: “You must think about the race while you are riding it, keeping your eyes open, and taking advantage of any mistake in judgment that an opponent may make, saving yourself as much as possible, always trying your hardest to win…” and here he allows his Victorian values to encroach “…never forgetting that you are a sportsman and a gentleman.”

Furnivall himself had a short career as a sportsman. As a surgeon, he was forced to retire to Cornwall in 1919 due to ill health, and died in 1938. His colleague, H S Souttar, remembered him in his BMJ obituary as a “…tall gaunt figure in a great fur coat, smoking an enormous cigar, stepping out from one of the earliest of motor cars”. As he aged then, Furnivall clearly forgot some his own health advice and also swapped his trusty two (or three) wheels for four.