Phyllis Knocker: first female president of the College of Medicine of South Africa

In June 1978, the distinguished South African surgeon Phyllis Knocker became the first medically qualified woman to become an honorary fellow of the Royal College of Surgeons. Five years later, she achieved another first – becoming the first female president of the College of Medicine of South Africa. 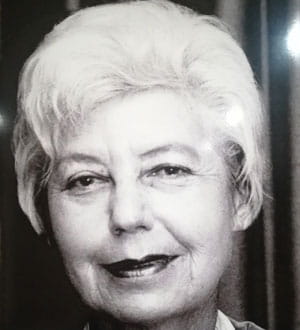 As the then Sir Rodney Smith described in a citation read at the RCS ceremony, she had ‘… the kind of career that would make the recording angel take up shorthand’. She studied medicine at the University of the Witwatersrand in Johannesburg and qualified in 1947 with the David Lurie memorial medal for the best student in surgery in the final examination. In an indication of her achievements to come, at Witwatersrand she was the first woman president of the Medical Students’ Council.

She went on to work with Professor Jack Douglas at Johannesburg General Hospital, where she wrote a thesis for an MS degree on the effects of total body cooling on vital organs, research which was published in The Lancet. She later became a consultant at the hospital.

She eventually chose a career in private practice, where, according to an obituary by Ron Tucker, another president of the College of Medicine of South Africa, she earned an ‘…excellent reputation not only for her surgical skill and medical acumen, but for her devotion to patient care. She set a great example as a teacher of undergraduate and postgraduate students and her dedication to this continued throughout her career.’

Sir Rodney summed up her achievements in 1978: ‘In a specialty in medicine where even now it is difficult for a woman to gain full recognition of excellence, and at a time and in a place where one could say that the difficulties were even greater, Phyllis has come up the hard way, through fierce competition in a “man’s world” and made it to the top.’ He went on to describe her as having: ‘…a warm and friendly personality, [with] a sense of humour, generosity to others, a welcoming affection for old friends.’

In all she did she was strongly supported by her husband, Dr Simon Boris Zalman ‘Zolly’ Frame, a GP she married in 1947. According to Tucker, they were ‘…the ideal example of a loving, mutually supportive couple, both of whom served the medical profession with distinction’. They shared a love of classical music, literature, ballet and caravanning.

Zolly died in 1987 and Knocker died in June 1992 at the age of just 67 after a long illness. She is remembered at the Colleges of Medicine of South Africa by a prize named in her honour – the Phyllis Knocker/Bradlow annual award – and by the naming of a hall at the College’s Johannesburg building.