Last week we searched the RCS Tracts and Pamphlets Collection for tales on 19th century army medicine. This week we are exploring the collection to find out about the navy, both Royal and Merchant. Sailors throughout history have risked serious injury while at sea and suffered from diseases and ill health just like landlubbers. However, it’s much more difficult to get access to proper medical care when you are in the middle of the ocean.

In 1867, Dr Harry Leach, Medical Officer of Health for the Port of London, wrote a Report on the hygienic condition of the mercantile marine, and on the preventable diseases of merchant seamen. It covered ocean going vessels, as well as coasters, with a focus on the diet required to avoid scurvy. He went on to publish a medical guide for the use of ships captains in 1868. The RCS has two copies of the Ship Captain’s Medical Guide, 1868, which cover disease prevention, treatments for illnesses and injury, plus the forms needed to certify births and deaths. It also contains some great adverts, from outfitters to lemon juice and carbolic soap. It cost one shilling and every British ship had to purchase and carry a copy. In fact they still do, the 22nd edition is the current version. William Henry Flower had similar concerns, writing On the importance of a knowledge of the elements of practical surgery to naval and military officers, 1859. 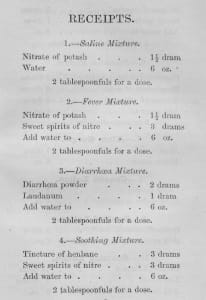 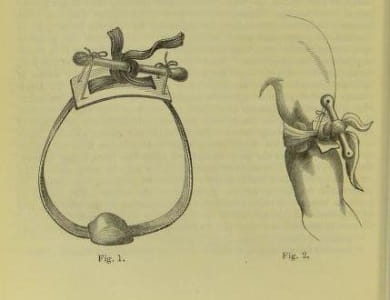 Disease affects everyone on land or at sea. Sir Gilbert Blane was a physician whose outstanding improvements to the health of the navy contributed to Nelson’s victory. He sailed with Admiral George Rodney to the West Indies in 1779. He was a firm advocate of strict sanitary measures and the inclusion of fresh fruit in the seaman’s diet. His 1830 Brief statement of the progressive improvement of health of the Royal Navy summaries the dramatic improvements in naval health that had occurred in the previous 50 or so years.

Scurvy continued to be a problem for those at sea. George MacKay covers both cholera and scurvy in Notes on the cholera at Varna in 1854, focusing on his experience on HMS Agamemnon. Alex Armstrong published his Observations on naval hygiene and scurvy: more particularly as the latter appeared during a polar voyage in 1858 using his journal of practice, kept while serving on HMS Investigator. It is a topic that is also covered in Robert Galloway’s pamphlet The food of our sailors, and On a simple and inexpensive plan for rendering the salted meat more nutritious published in the 1870s. 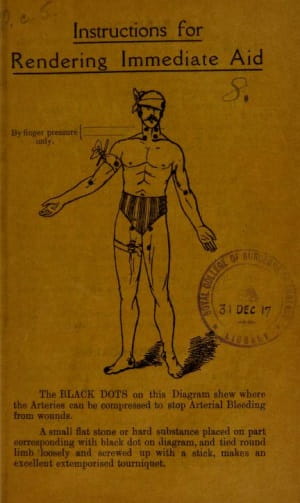 The need for easily understood advice for giving first aid continues to be important even today. Instructions for rending immediate aid was added to the Library collection in 1917. It was issued free to soldiers by Major MacLure of the London Scottish (retired), and late President of the Volunteer Ambulance School of Instruction. The black dots on the diagram show where to compress the arteries to stop bleeding. A small, flat stone folded in a handkerchief tied around the limb can be screwed tight with a stick as an emergency tourniquet. The final step to saving a drowning person is to give them weak, warm brandy and water or wine when they are able to swallow. Not, I suspect advice you will find today.

While exploring the idea of naval medicine I came across George Farren’s fantastically named 1826 work Observations on the importance in purchases of land, or mercantile adventures, of ascertaining the rates or laws of mortality among Europeans, by chronic diseases and hot climates: on the data necessary for constructing tables to show the probable duration of a disease: illustrations of the progress of mania, melancholia, craziness, & demonomania, as displayed in Shakespeare's characters of Lear, Hamlet, Ophelia, and Edgar: on the comparative danger of first and subsequent child-births: with an appendix, containing the form of a deed for establishing a joint-stock company, without requiring the aid of Parliament, or the incumbrance of an Act to sue and be sued. It was an important question at a time when there were no safety nets for dependents when the breadwinner died. 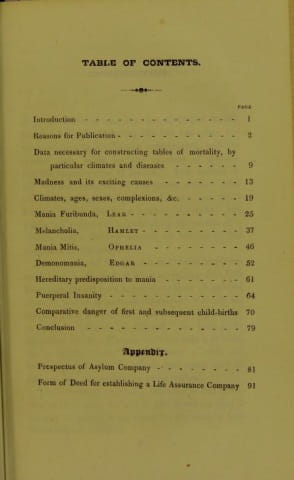 21,496 items from the Library’s 19th century Tracts and Pamphlets Collection were digitised between 2015-2016 as part of the UK Medical Heritage Library (UKMHL) project. This made most of the collection freely accessible online to everyone. We are currently working on integrating copies of the digitised pamphlets into the RCS online collections catalogue, SurgiCat+, to make them even easier to find.

In June 2018, the UKMHL was integrated into the main Historical Texts service provided to UK HE and FE institutions as well as via the British Library’s reading rooms in London. The RCS pamphlets are the second largest collection in UKMHL and this move opens the collection further to research. From when the first items became available in 2015 until January 2018, the collection has received well over one million views, so dive in and explore.