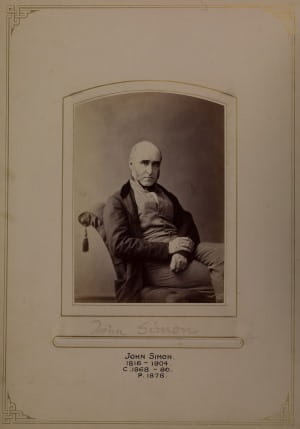 Sir John Simon (10 October 1816 – 23 July 1904), pathologist, surgeon and public health reformer, was born 200 years ago. October 2016 marked the 150th anniversary of the Sanitary Act (1866), which Simon was influential in bringing about. Through his promotion and efforts to improve public health, Simon transformed the idea of sanitation, and this led to the establishment of modern standards of public health service.

The portrait to the right is from the Council Club Photograph Album, RCS-GOV/2/11/1. 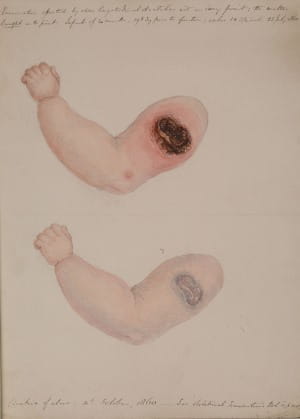 Left is a colour drawing of a vaccination effected by close longitudinal scratches on a child’s arm (MS0028/2/2), one of the many cases under the care of John Simon.

In early nineteenth century, public health was not considered a responsibility of the government and the attitude of ‘laissez-faire’ was the norm; there was no administrative authority or systematic guidelines to control the spread of disease or to deal with sanitary problems, and the concept of the science and practice of preventative medicine was relatively unknown.

In response to Parliament passing the Public Health Act of 1848, and to deal with the threat of cholera and other public health problems, which plagued London at the time, Simon was appointed the first Medical Officer of Health for the City of London, until 1855. As a Medical Officer, he produced comprehensive annual reports on various matters such as the relation of cholera to London water supply (1856), on vaccination (1857), and on the sanitary state of the people of England (1858).

He was then made the head of the Medical Department of the Government (a post equivalent to the modern Chief Medical Officer of Health to the General Board of Health) until his retirement in 1876, and has to be considered the founder and, in some respect, its creator. Pathology interested Simon, and although having had no prior public health experience, it was perhaps the continued study of pathology that gave him a distinct advantage as a Medical Officer. He was also a member of the Pathological Society of London, and was elected President in 1867 until 1869.

Simon called for municipal action to provide adequate sanitary disposal and drainage, improved standards of housing, and improvement of the water supply. His advocacy of public health legislation resulted in the Sanitary Act of 1866, which for the first time rendered a public health law universal and compulsory, and in the Public Health Act of 1875, which provided a complete sanitary code that, with adjustments, remained in force for the next hundred years.

The Sanitary Act was passed as a result of the fourth cholera epidemic, which caused 6,000 deaths. The Act compelled local authorities to take action to improve local conditions; they became responsible for the provision of clean drinking water, ensuring sewerage systems were in place, tackling overcrowding, and removal or improvement of slum dwellings. Every town was required to appoint Sanitary Inspectors and the government was empowered to intervene and remove health concerns where local authorities failed to act. The state was now directly involved in public health reform.

Among his other achievements was also the establishment of the General Medical Council, the licensing body for medical practitioners in the United Kingdom, under the Medical Act of 1858. Here is a printed copy of the Act to amend the Medical Acts so far as relates to the Royal College of Surgeons of England, 1875 (MS0028/5/1/1), with manuscript annotations by Simon. 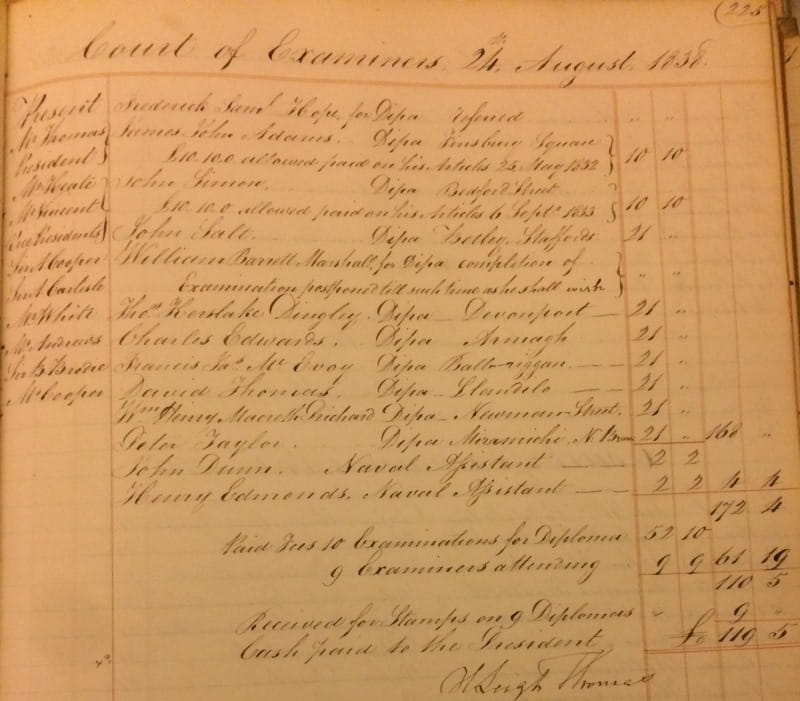 He was also a member of Privy Council, 1858-1876, and President of the Royal Society, 1879-1880, of which he had been a Fellow since 1845. After his retirement, Simon occupied himself with public work and was a Crown Representative on the General Medical Council. He was also the founder of the Grocers' Company scholarships for the promotion of sanitary science. He was knighted in 1887. At the end of his career he was awarded two medals, which had been founded for the purpose of recognising eminence in sanitary science - the Harben medal of the Royal Institute of Public Health (1896) and the Buchanan medal of the Royal Society (November 1897).

Simon insisted that practice should be based on scientific knowledge, and emphasised the importance of scientific investigation and research. In his eyes, this was key to finding out the causes and processes of important diseases, which would in turn lead to the improvement of preventive medicine.

Despite his eminence, Simon received little public recognition. He gradually augmented a state medical department to administer public health, improved public vaccination, was influential in bringing about the Sanitary and Public Health Act, as well as helping towards the regulation and improvement of the standard of medical professionals. At a time when public health issues were not seen as a priority, Simon’s contribution and dedication to sanitary reform was significant and admirable, and his perseverance resulted in much needed reforms.

An exhibition celebrating Simon and his work is currently on display to visitors in the RCS Library until Friday 19th May.