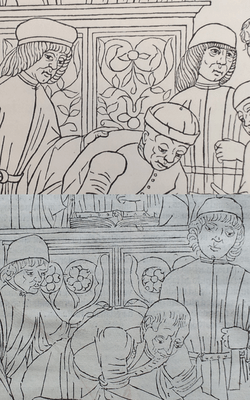 While trying to research the inclusion of neuroanatomical details in the drawings of Italian artists on behalf of a College fellow, I came across Dr Mortimer Frank’s 1920 edited and translated version of Dr Ludwig Choulant’s 1852 History and Bibliography of Anatomic Illustration. This is a fantastic reference work, which gives extraordinarily detailed descriptions of artistic anatomy.

Browsing through it, I stopped to read the chapter on Johannes de Ketham, a 15th century German physician practising in Vienna, who is associated with a collection of medical instruction texts circulating at the time amongst practitioners. The first edition of this collection, named Fasciculus Medicinae and written in Latin, was published in 1491 in Venice and it is particularly noteworthy because it includes the very first anatomical illustrations in the form of woodcuts. The book proved to be tremendously popular, and appeared in 33 editions until 1668. A second edition in Italian was published in 1493 and a third edition, again in Latin, in 1495. This is the edition we hold in the College library.

Frank and Choulant draw attention to the fact that one of the images in this edition differs significantly from that used in the previous edition. It appears that the woodcut depicting the opening of a cadaver may have been lost or become unusable and was therefore replaced, albeit with a cruder and clumsier version, which also incorporates various changes in the scene.

The window at the left has no casements, and permits a view upon a landscape; in the window at the right none of the casements are broken. The lecturer in the chair has a book in front of him and raises his right hand above his left. The scrotum of the corpse is not visible. On the table upon which the body lies, one can see places where the table legs are inserted, which were not visible in the older plate. The dissector is bareheaded, his dress is not buttoned all the way up, but is open at the neck. The persons standing behind him all have their heads covered, with the exception of the head farthest to the right, which is covered in the older plate. The lowest figure standing close to the head of the cadaver has no small wand in his left hand and no right hand. The small basket is on the right side instead of the left side of the picture. The parquetry of the floor is composed of a much greater number of fields than are apparent in the original picture. The expression on the faces of the figures is by far less beautiful […], as can be noticed, particularly, around the eyes and the mouths of the persons. 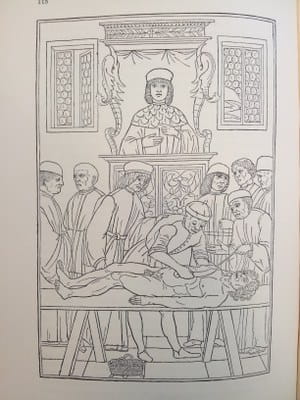 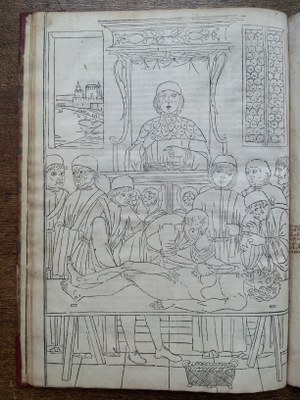 Our images are taken from the Frank and Choulant book, which shows the image originally included in the 1493 Italian edition of the Fasciculus Medicinae, and from the College copy of the 1495 Latin edition.