St. Ives: sun, sea, sand, surfing, art galleries, fudge and of course, ice cream. A recent visit to the resort for a family holiday was also not complete without calling on the home of a former famous resident, Dame Barbara Hepworth. One of the few female artists of her generation to achieve international acclaim, she was renowned for her modern sculpture and a leading figure in the colony of artists who resided in St. Ives during the Second World War. Dame Barbara is now recognised as one of the most important sculptors of the 20th century.

Many of these sculptures are now displayed in the garden of her home, where she tragically died in a fire in 1975. It was during the obligatory visit to the gift shop that my eye caught the cover of a book, which showed an image that I had seen before.

Between 1947 and 1949, Hepworth sat in operating theatres in Exeter and London, producing 80 depictions of surgeons and their teams at work. Although famous for her sculptures, Hepworth is less well known for her drawings. The Royal College of Surgeons of England owns one of these drawings, painted in 1948 at the Princess Elizabeth Orthopaedic Hospital in Exeter. 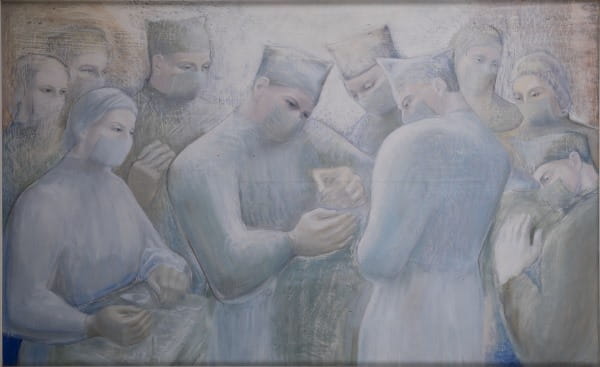 RCSSC/P 418 - Painting of an operating theatre by Barbara Hepworth, signed and dated, 1948. © Bowness: used with permission.

Dame Barbara’s connection to the operating theatre began in 1944, when her daughter Sarah became ill with a bone condition called osteomyelitis. She became friends with her daughter’s surgeon Norman Capener who was a talented artist and sculptor in his own right.

Hepworth’s reaction to the suggestion that she record life in an operating theatre was initially “one of horror”. Yet, over time, she concluded that the theatre’s atmosphere was one of “concentration and rhythm”. In the operating theatre, “one can observe the highest intention and purpose; one can see the most perfectly attuned movements between a group of human beings”. The images show the large, long, delicate hands of the surgeons, the close details of their eyes as they concentrate, the tools they use, the fine threads of the sutures. It has to be noted as well, that these drawings were being produced around the time that the National Health Service was being formed. This co-operative endeavour, which underpinned the social reforms of the post-war era, is encapsulated in the 80 images that were produced. 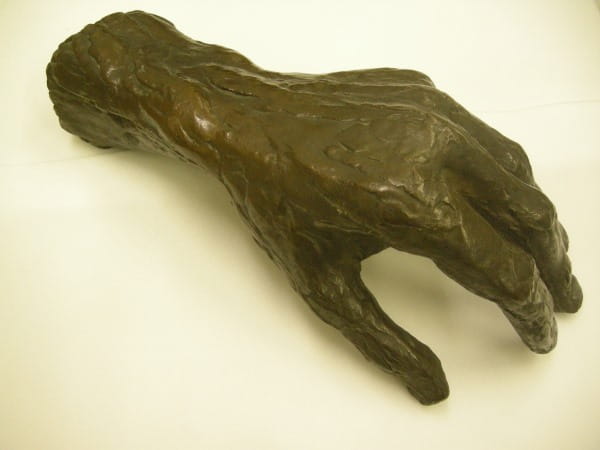 RCSSC/P 449 - Sculpture of the hand of Norman Capener, bronze, by Dame Barbara Hepworth, initialled and dated 1950. © Bowness: used with permission.

Hepworth’s grandson Paul Bowness, a Professor of Experimental Rheumatology at Oxford University, said it best: these images “captures the intensity of concentration of hands and eyes, and the harmony of all members of the operating team”.