The British Journal of Surgery now available to RCS members from Vol. 1 (1913) 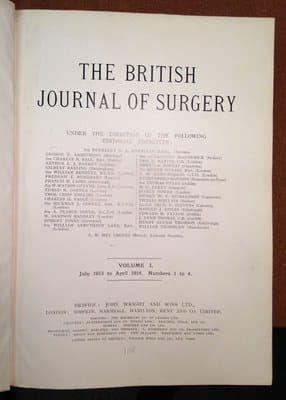 We are pleased to announce that we have purchased the back files of The British Journal of Surgery, one of the world’s premier surgical journals and one whose history is closely associated with this College. This means that RCS members now have online access to all the published material from volume one to the present day, where previously online access only went back to 1997.

RCS members can access The British Journal of Surgery by logging in (top of this page) to the College website and visiting the journal homepage at Wiley Online (help on accessing content at Wiley can be found here). The title can also be found on SurgiCat+ and the Library's Online Journal Finder.

Dr Sam Alberti, Director of Museums and Archives at the RCS, wrote a detailed account of the beginnings of The British Journal of Surgery, which was presented at its Centenary Symposium in 2013. The extracts below are taken from this paper. [i] 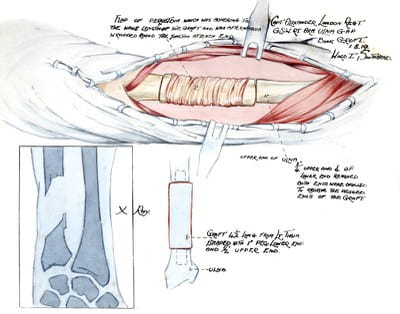 Artist Dulcie Pillars’ diagram of a Hey Groves procedure, 1919. (From the Royal College of Surgeons Archives.)

Shortly after lunch on 13 February 1913, eight surgeons met in an upstairs room at the Royal College of Surgeons of England (RCS) on Lincoln’s Inn Fields. In the Chair sat Sir Berkeley Moynihan, Professor of Clinical Surgery at Leeds—freshly knighted and elected to RCS Council. Robert Jones of Liverpool, whose fame as an orthopaedic pioneer was beginning to spread, also represented northern expertise. More local were St George’s surgeons Sir William Bennett and Thomas Crisp English (like Jones, later knighted), Edred Moss Corner of St Thomas’s, Charles Herbert Fagge of Guy’s (not to be confused with his uncle, the Guy’s physician Charles Hilton Fagge) and William Sampson Handley of the Middlesex. Moynihan may have been in the Chair, but it was the final member of the group who was steering: Ernest William Hey Groves of Bristol. With Moynihan’s support, Hey Groves moved to set up a new journal. He recommended:

Moynihan was immediately elected as the first Chair, and Hey Groves as the first Editorial Secretary. […] However, it was Hey Groves who drove the journal. A child of the Empire, he was born in India, where his father was an engineer. After returning to his native Bristol he intended to follow his father’s career but, after obtaining a Bachelor of Science degree at London University, he won a scholarship to study medicine at St Bartholomew’s. […] With his inherited mechanical aptitude he developed an interest in orthopaedic operations; leading up to and during World War I he undertook pioneering work in fixation and grafting. His techniques were stunningly rendered by the Bristol artist Dulcie Pillars [see below]. […] Hey Groves had already published his successful textbook A Synopsis of Surgery [iii]. It was while updating the Synopsis that Hey Groves had begun to formulate the idea of a journal, due to ‘the unpleasant fact that every leading country in Europe and America had its Journal of Surgery, whereas this country, the native land of Hunter and Lister, had nothing more than general periodicals. [iv]

As Dr Alberti notes, “The early 20th century was a key moment in the professional identity of surgery, and of British surgery in particular, thanks not only to technical developments in the wake of asepsis, but also because of the post-Lister institutional developments, of which the British Journal of Surgery was one. […] The contribution of surgery to British life and welfare would be demonstrated strikingly in the years that immediately followed the establishment of the journal as surgeons (including all those of serviceable age on the Editorial Board) served in the Royal Army Medical Corps during World War I and made technical advances that would set the scene for the following century, as so vividly demonstrated in the pages of this august journal.” 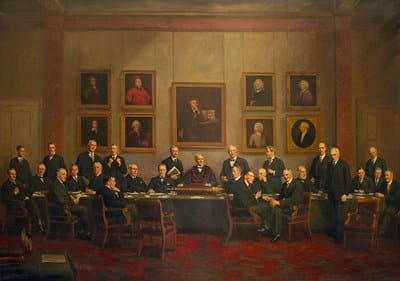