The Twelve Days of Christmas - Part 1

Our RCS Collections Review, which has been running throughout 2015, has given us unprecedented insight into the College’s museum, library and archive holdings. The Twelve Days of Christmas carol provides us with a perfect seasonal opportunity to highlight just a few of the fascinating items that we have (re)discovered over the past year. This week: days 1-4. 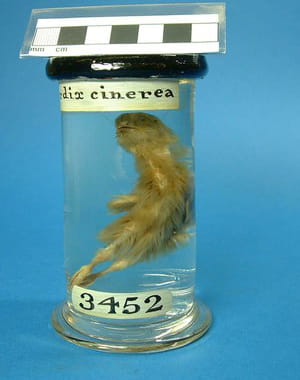 A Partridge in a Pear Tree

This grey partridge (RCSHC/3452) is a historical specimen made by or for John Hunter. It is part of the “Products of Generation” series, the entirety of which, in contrast to the decimated “Circulatory System” series, survived the bombing of the College in 1941. It shows a young bird near the end of incubation, with well-developed legs, beak and plumage. 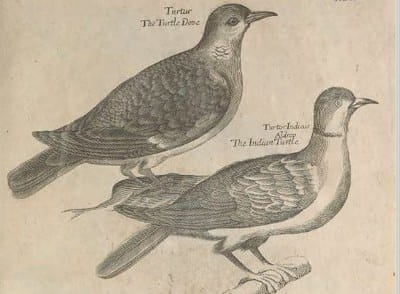 This image of a turtle dove comes from The Ornithology of Francis Willoughby. The College holds many books on the subject of natural history, some of which are hundreds of years old. This particular work, which is seen as one of the fundamental texts in the development of ornithology, was published in 1678 and contains many other plates illustrating a variety of species. More of the images can be seen in “The Ornithology of Francis Willoughby 1678” on the blog.

In the archives, we hold a manuscript (MS0062) entitled “On the Incubation of an Egg.” Although it contains the date 1769, we have no further information about when it might have been written or who the author might be. This is often an issue in archives and can make it difficult to fully understand the significance of the item in question. As you can see from the image, some of the manuscript notes are observations on Malpighi’s work. Interestingly, we do have a copy of Malpighi’s Dissertationes Epistolicae duae una de Formatione Pulli in Ovo. Written in French and published in 1673, it details the formation of the chicken in the egg and contains some fascinating descriptive plates – our French hens. 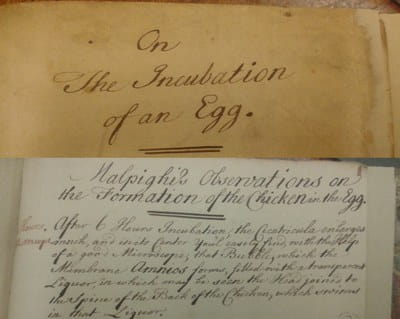 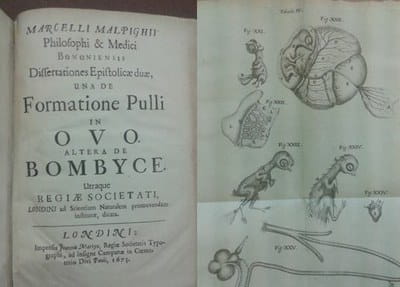 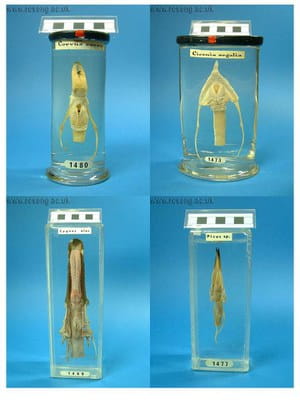 John Hunter collected thousands of preparations from over 500 different plant and animal species, and his lectures stressed the relationship between structure and function in living things. These preparations of four birds’ tongues and larynges, or voice boxes – you might even say, what they use to call with – are a great example of how his collection supported the study of comparative anatomy. Whilst the swan’s tongue (bottom left, RCSHC/1469) has spikes which act like a sieve when feeding, the woodpecker’s (bottom right, RCSHC/1477) is long, sharp and narrow, for spearing insects inside tree trunks. The raven’s cleft tongue (top left, RCSHC/1480) has been the subject of folklore for centuries. The stork’s (top right, RCSHC/1473) is more unremarkable, but alternate narrow and broad tracheal rings can be seen, which are peculiar to wading birds and help prevent the lateral dislocation of the neck.