The Twelve Days of Christmas - Part 3

This is it, the final part of our 12 Days of Christmas series. We hope you enjoyed getting to know a little bit more about the fascinating collection of books, archives and museum items that are held in our Designated collections. 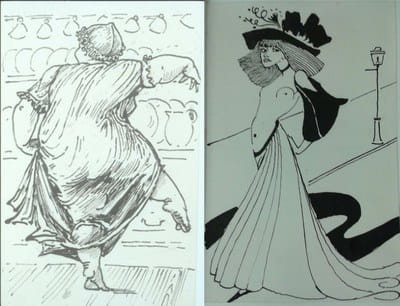 We might not have nine ladies dancing, but we do have two! In the archives we have a collection of correspondence to and from Rudyard Kipling (MS0019) which includes two letters and accompanying illustrations from his uncle by marriage, the artist Edward Burne-Jones (1833-1898). Burne-Jones was known to draw spontaneous caricatures of people and events that occurred in his life. He sent these letters and drawings to Kipling in 1897 shortly after the birth of Kipling‘s son John, where the Kiplings‘ cook was thought to have danced a little jig. He writes to his nephew Kipling, as if from an impoverished artist, submitting designs to accompany a poem about the dancing cook, one in the style of Mr Aubrey Beardsley. 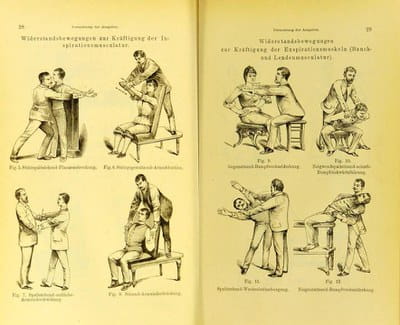 These lords aren‘t exactly leaping but they are certainly doing some exercise. These images come from Albert Reibmayr‘s Kurze Anleitung zur Mechanisch-Physikalischen Behandlung der Fettlebigkiet (Brief Introduction to the Mechanic-Physical Treatment of Obesity, 1890). They illustrate some resistance exercises designed to strengthen the muscles used for breathing. Reibmayr also recommended increased physical exercise and maintaining or reducing the amount of food and alcohol consumed. This pamphlet was digitised and is now available freely online as part of the UK Medical Heritage Library – more about the College‘s involvement in this project can be found in a previous post. 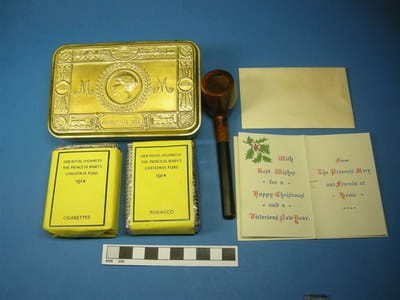 This interesting set, comprising of a pipe, tobacco and cigarettes, is very appropriate to our Christmas theme given that it was a gift of the Princess Mary‘s Christmas Fund. These gifts were sent to servicemen at the Front or at sea for the first Christmas of WWI. Although we are now very aware of the links between smoking and cancer, the real dangers of smoking were not really understood in Britain until the mid-1900s. 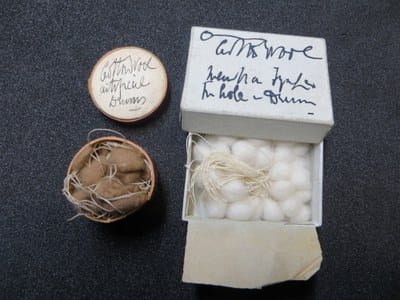 At first glance you would be forgiven for thinking these images are of inconsequential pieces of cotton wool. However, if you look closely you can see from the handwritten descriptions at the top of the boxes that these are in fact artificial ear-drums. This type of cotton-wool implant was proposed by surgeon James Yearsley in the mid-1800s in his article “On a new mode of treating deafness, attended by loss of the membrane tympani, associated, or not, with discharge from the ear” published in The Lancet. As Yearsley himself puts it, “I have now…the extreme gratification of promulgating a mode of relief for deafness attended by the loss of the membrane tympani, which will cause great surprise among the readers of The Lancet, not less from its extreme simplicity, than from the extraordinary success which generally attends its employment”. The Library holds a reprint of this article in its collections of tracts and it is also in the process of being digitised as part of the UK Medical Heritage Library.