Browsing through the College’s collection of folios with anatomical illustrations, we occasionally come across the same plate in various works. We found this particular plate in three of our anatomy books, first published by Scarpa, then by Loder and by Bierkowski. 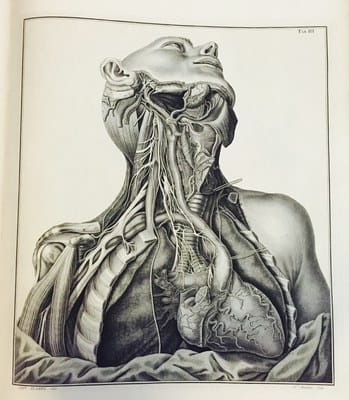 Antonio Scarpa (1747-1832) was an Italian surgeon and anatomist. He was Professor of Anatomy and Surgery and travelled extensively through France, England and Germany. He was a fine anatomist and an excellent artist: he trained the celebrated engraver Faustino Anderloni to engrave his illustrations, resulting in sets of stunning anatomic prints in his publications. Tabulae nevrologicae ad illustrandam Historiam Anatomicam cardiacorum nervorum, noni nervorum cerebri, glossopharyngaei, et pharymgaei ex octavo cerebri, from which our image was taken, was published in 1794 and is considered to be Scarpa’s anatomic masterpiece. The seven plates are all accompanied by outline plates with explanatory markings and the illustrations were drawn by Scarpa and engraved by Anderloni. 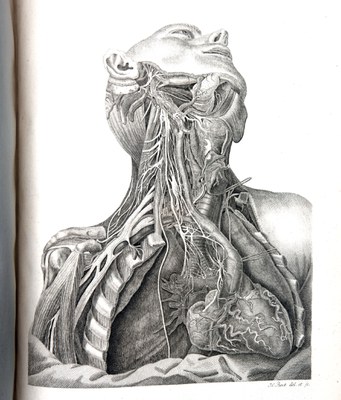 We find the plate a second time in Tabulae anatomicae (1803) by Justus Christian von Loder (1753-1832). Loder was a German physician and anatomist from Riga. In 1778 he became professor of anatomy, surgery and obstetrics in Jena; after 1809 he became professor of anatomy and surgery in Moscow. According to Frank and Choulant’s History and Bibliography of Anatomic Illustration, Loder began working on this compilation in 1794, supported by the Bureau of Provincial Industries in Weimar, with the aim to compile in one work “all the best representations then known in all the different branches of anatomy, supplemented by representations of original preparations”. In 1810 he became personal physician to Czar Alexander I, and he later led the military hospital in Moscow. He died in Moscow on April 16, 1832 and the Russian government bought his anatomic collection for 50,000 silver rubles. 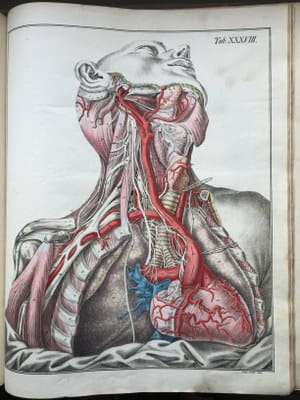 We find the plate again in Anatomisch-chirurgische Abbildungen nebst Darstellung und Beschreibung der Chirurgischen Operationen nach den Methoden v. Graefe, Kluge und Rust (1827) by Ludwig Joseph Bierkowski (1801-1860). This is a striking atlas accompanying a comprehensive text volume with most of the illustrations drawn by Bierkowski himself. A notable exception is Scarpa’s plate. Bierkowski gained his medical doctorate in Leipzig in 1829, after the publication of his major work. In 1831 he became professor of surgery at the medical faculty of Krakow. In his impressive atlas he acknowledges that this plate was copied from Scarpa, and explains that it shows the open chest and right side of the neck, with the aorta and heart slightly moved in order to allow a better view of the lungs. Bierkowski took on the leadership of the military field hospital in Krakow and was awarded the Gold Cross of the Order of Military Virtue for the generous and effective assistance to the wounded insurgents. His surgical instruments and other memorabilia from his study are part of the collection of the Museum of the Jagiellonian University Faculty of Medicine in Krakow.