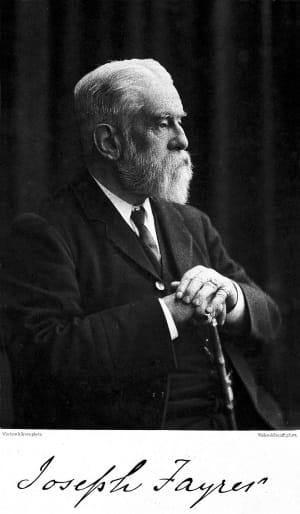 Joseph Fayrer was born at Plymouth in 1824, the second son in a family of eight children. His father was a Commander in the Royal Navy, so the sea was in his blood. He studied engineering for a short period and travelled to the West Indies, South American and the Caribbean as a midshipman. An outbreak of yellow fever during this period sparked an interested in medicine and he returned to London to study at Charing Cross Hospital in 1844, when he was 19. Completing his initial surgical training, he joined the navy in 1847, but resigned his commission to travel around Europe with Lord Mount Edgcumbe. He resumed his medical studies in Rome and completed his MD in 1849. He was appointed as an Assistant Surgeon in the Indian Army in 1850.

Right: ‘Sir Joseph Fayrer’, from the Wellcome Collection. Free to use with attribution CC BY.

Fayrer spent the next 45 years in the Indian Medical Service. He saw action at the Pegu War during the Burmese campaign of 1852 and survived the Siege of Lucknow with his wife and child in 1857. During the siege, his house was used as both a fortress and a hospital, and you can read about his experience in his autobiography Recollections of my life. During a break from his Indian career, he gained his MD from Edinburgh in 1859, returning to India later that year to take up the post of Professor of Surgery at Calcutta Medical College. He became President of the Asiatic Society of Bengal in 1867 and proposed a scheme for a zoological garden in Calcutta, which eventually opened in 1875. 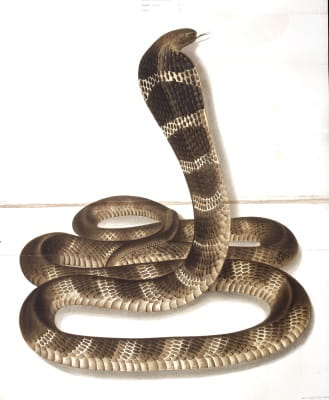 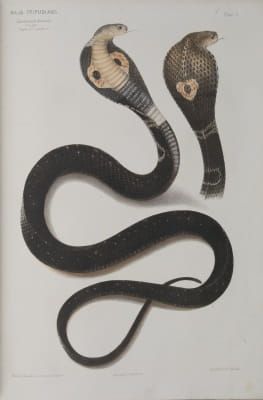 Fayrer must have been a man of immense energy. He became a renowned expert on European health in India and wrote extensively about Indian climatology, sanitation, the pathology of Indian diseases and zoology, but his greatest interest was in the effects of snake venom on the human body. He studied all aspects of snake poisoning, often having to leave his experiments to attend to his hospital work. Despite this, he was responsible for many advances in the treatment of snakebite. This was important work: by collating information from official Government records of death due to snakebite, Fayrer recorded a mortality of 11,416 persons for the year 1869 in the Presidency of Bengal, and estimated a mortality of more than 20,000 for all British India.

In 1872 he published The Thanatophidia of India: being a Description of the Venomous Snakes of the Indian Peninsula, with an Account of the Influence of their Poison on Life; and a Series of Experiments. This large, folio-sized book is beautifully illustrated with 28 chromolithographed coloured plates showing the different snakes. The snakes are shown in very fine detail, with subtle colouring which would have greatly aided identification. These exquisite illustrations were drawn from life by members of the Calcutta School of Art under Fayrer’s direction. Some are so life-like that the snakes look as if they are coming out of the page. The book contains a significant amount of Fayrer's research, and describes in detail nearly 500 of his experiments on cases of snakebite and subsequent treatment. 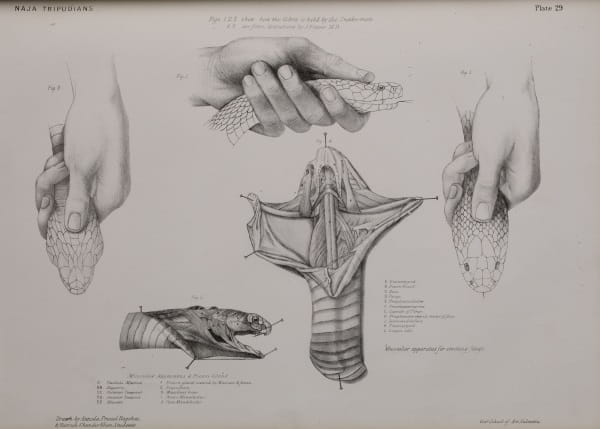 Fayrer returned to Britain in 1872, and was appointed President of the India Office Medical Board and Fellow of the Royal College of Physicians. He continued his work on snake venom, working with Lauder Brunton to study the physiological action on Naja venom in more detail. As President of the Medical Board of the India Office in London from 1873 to 1895, Sir Joseph Fayrer was very concerned with the cholera epidemics which resulted in an average mortality of over 200,000 persons annually. In 1885, he represented the Indian Government at the fourth International Conference on Cholera, a fore-runner of the World Health Organization. He was made a baronet in 1896 and moved to Falmouth when he retired, where he took an interest in deep-sea fishing and yachting, dying there in 1907.

A contemporary obituary of Sir Joseph Fayrer by Sir Thomas Brunton can read in the Library collection, which gives an interesting overview of his life from a close associate. Fayrer was a prolific author and the Library has a large collection of his books and published papers including several on snake venom, many of which have been digitised and can be easily accessed from our catalogue.