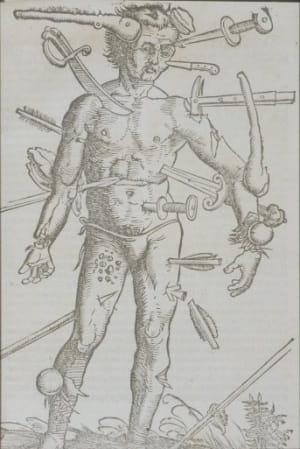 The ‘wound-man’ was a popular image in early printed books. Pierced by a variety of weapons, he demonstrated the possible wounds and injuries a physician might be called on to treat. This wood-cut of a wound-man is taken from Hans von Gersdorff’s landmark work Feldtbüch der Wundartzney (Fieldbook of Surgery), published in 1517 at Strasburg.

Gersdorff was a German army surgeon with decades of experience gained during the many wars in the sixteenth century, although little is known about his personal life or background. Written in vernacular German, his work is particularly valuable for its many important illustrations. Not only do they tell us about surgical practices of the day, but also aspects of social history such as what people wore and the interiors of houses. One battle scene shows a cannon guarded by a trio of soldiers armed with muskets. This version of the wound-man is the first such image to include a pair of cannonballs striking the figure’s wrist and shin and the subsequent damage caused.

Many of the images are quite technical, if not always complete or precisely accurate. The book was widely used as a basic surgical text for many years, most notably for its advice on limb amputation. Gersdorff was reputed to be very experienced, with at least 200 procedures to his credit. 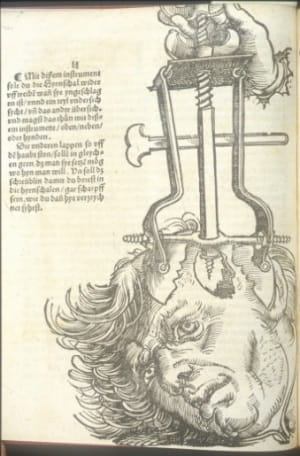 In the book, he describes a number of techniques and instruments. His text is accompanied by instructive illustrations of early surgical procedures. The illustrations are both anatomical and surgical, showing very graphically how operations were performed. Gersdorff concentrated on traumatic surgery and wounds, showing the extraction of arrows and bullets. He made some improvements on previous practice, notably giving the patients opium before the operation, occasionally providing blindfolds, and stopping the bleeding by pressure bandages made from the bladders of animals. He invented many ingenious devices to help deal with fractured limbs - some of which resemble instruments of torture! As this wood-cut demonstrating a drill used for trepanning shows, his overriding interest was in surgical instruments, and he put a lot of time into developing new ones.

There is one feature of the book which echoes contemporary practice: we can find advertising jingles such as the following in several places within the book: “When I’ve been hit in hip or thigh and wounded so that death is nigh I hope that God will stand by me and grant me Gersdorff’s surgery”.