How I used 3D printing to practise complex transplant operation

As a Transplant Specialist Registrar (SpR) at Guy’s and St Thomas’ and Great Ormond Street - which is one of the country’s leading collaborative transplant centres for adults and children - and as a Research Fellow at the MRC Centre for Transplantation at King’s College London, I have the great privilege of contributing to pioneering surgical work that can benefit patients.

Part of my current research is about trying to reduce the chance of a donor kidney being rejected by the recipient patient, by using novel, cutting edge technology. For instance, we are evaluating a technique called ex vivo normothermic perfusion (EVNP) to protect donor kidneys against the effects of incompatible antibodies in the recipient. The kidney is coated with drugs prior to transplantation to offer protection against rejection. I received a RCS College Research Fellowship for this work. 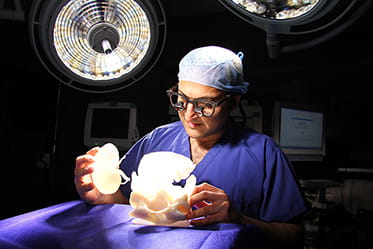 Another aspect of my research is using 3D printing to help overcome difficult anatomical challenges in transplantation. A recent example of this was transplanting an adult-sized living donor kidney from a father, into his two-year-old daughter. She weighed less than 10 kg, had renal failure and had previously had extensive abdominal surgery. This made implantation uncertain and risky.

I was interested in how 3D printing could support planning this difficult surgery by producing models of the adult donor kidney and the respective recipient abdomen. This provided an informative, hands-on approach to a case where surgeons could discuss the approach and complexities in a multidisciplinary meeting and also rehearse the steps collectively. The models are also valuable as a consenting and training tool.

I further developed this idea with my surgical, radiological and medical physics colleagues at Guy’s and St Thomas’ and in November 2015 we used this innovative technique for the first time ever. It proved a success and our preliminary work received widespread nationalmedia coverage. It was quite an experience to suddenly be discussing surgical approaches with journalists on national newspapers and on live television, but I greatly enjoyed promoting our work and sharing our learning!

I was also hugely honoured to be awarded, the same week as the media coverage, with the Royal Society of Medicine Norman Tanner Medal 2016 for presenting a paper on outcomes after paediatric transplantation and how to address difficult surgery, including through the use of 3D printing. The Science Museum in London expressed a desire to display our 3D Model in their Medical Galleries for 2018. This is a huge honour in itself and I remember being much inspired and motivated by visiting the Science Museum to learn about my heroes; Lord Joseph Lister, the father of modern surgery, and the great philosopher of natural science, Michael Faraday, FRS. What an inspirational temple of science it is!

In the light of Lister’s legacy, I feel very lucky to be working in an environment where innovation is welcomed. Being among an inspirational team of surgeons and medical physicists at Guy’s and St Thomas’, everyone has been really supportive of trying something new, in particular, Mr Nick Byrne from KCL Imaging Sciences, Professor Nizam Mamode and Mr Nicos Kessaris from the Transplant Surgical Unit. Our work represents the importance of collaboration between clinical surgery and medical physics to directly help patient care. This is exciting!

The most satisfying aspect of all of this, however, was hearing from the patient’s family after the surgery and knowing that the transplant was working well. It’s fantastic to see the difference the transplant made in the child’s life and we’re now aiming to use 3D printing to support safe and successful transplantation in similar cases.

He is Transplant SpR in the London Deanery and currently a Research Fellow at the MRC Centre for Transplantation, King’s College London, under Professor Mamode, Professor Dorling and Mr Callaghan.