Building ties between the UK and Egyptian surgical community 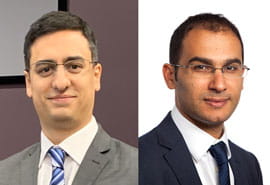 Adam Wahba is a Neurosurgery Specialty Registrar at Sheffield Teaching Hospitals and is taking time out of programme as the RCS Research Fellow for the National Neurosurgery Audit Programme. Adel Helmy is a Consultant Neurosurgeon and University Lecturer at the University of Cambridge.

In November 2019 a delegation from the RCS joined the President, Professor Derek Alderson, on a trip to Cairo, Egypt. The overarching aim was to build relationships with surgeons and institutions in Egypt and to explore collaboration with the College. As current and previous research fellows of the College, with personal ties to Egypt, we were invited to join the trip. It was a poignant experience as we are both of Egyptian origin. Adel having been born in Egypt before moving to the UK with his family. Adam has a mixed Egyptian-English background and has visited Egypt many times. It was a unique opportunity to visit a country to which we have strong personal links and contribute to the work of the RCS. The chance to take part in this historic visit – and to escape the dreary overcast skies of the UK to bright sunshine and 28°C for a few days – was irresistible.

After arriving late on Sunday evening, we set out early on Monday to a sprawling suburb on the outskirts of greater Cairo. The small party in our minibus included Professor Alderson, Miss Sue Hill – RCS Vice-President, Mr Martyn Coomer – RCS Head of Research, the trip organisers Rosemary Emodi and Zuzana Lescisinova and ourselves. We were headed to the Kimi Academy, a new training facility for healthcare professionals. ‘Kimi’, a Coptic word, means ‘black’ and was the Ancient Egyptians’ name for their country, referring to the dark, fertile soils deposited on the banks of the River Nile after the annual flood. The Academy was being opened by Pope Tawadros, the Pope of Alexandria and the Coptic Orthodox Church of Egypt, and Professor Alderson. We were greeted by the Pope and following a short private meeting, were given a tour of the sparkling new site. The Kimi academy is wholly funded by charitable funds and combines state of the art clinical facilities with infrastructure for teaching and training. The hope is that it can supplement local surgical services as well as training the next generation of surgical leaders, with the support of the Royal College of Surgeons.

Over the next couple of days, we visited two of the oldest medical schools in Cairo: Ain-Shams University Hospital and Cairo University Hospital (better known as Qasr Al-Ainy), and one of the newest: Helwan University Medical School. The discussions between the faculties and the president centered on how the College can support the advancement of surgical standards and training in Egypt. The delegation also visited the Egyptian Military Medical Academy, which has established links with the RCS. We also assisted the RCS president in hosting two workshops on surgical research skills for trainees and medical students. Both sessions were well received, and we were impressed by the enthusiasm and academic ability of the trainees.

Our final evening in Cairo was spent in the grand auditorium of Qasr Al-Ainy where the first-ever Diplomates Ceremony held outside the UK took place. After a tour of the Medical School Museum holding several historic artefacts (such as a painting of the first cadaveric anatomical dissection in Egypt since Ancient Egyptian times), we had the honour of assisting Professor Alderson and Miss Hill in conducting the historic ceremony. This was a special experience for both of us as both our fathers – Dr Hany Wahba FRCS(Edin) (1972-78), a GP Principal in south-east London – and Dr Ezzat Helmy (1962-67) were alumni of Qasr Al-Ainy. Candidates from university hospitals throughout Egypt were given awards including the FRCS, the Hallett Prize and the MRCS. The audience included faculty from the Court of Examiners, who were conducting a sitting of the MRCS Part B in Cairo, and family and friends of candidates.

Egypt currently has the largest number of RCS members outside the UK and this provides ample opportunity for collaboration between the UK and Egyptian surgical community in the areas of research, training, standards and universal access to high quality and timely surgical care. We hope it will be the first trip of many to come.