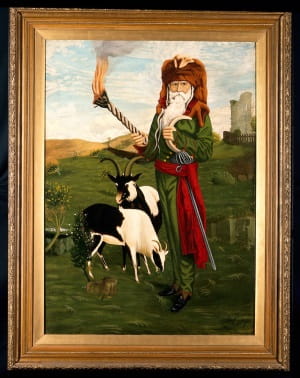 From humble beginnings in Llantrisant, Monmouthshire, William Price (4 March 1800 – 23 January 1893) came to London to study medicine and, according to accounts of his life, was made a member of the College around 1820, having studied under some of the luminaries of surgery at the time, including William Blizard and John Abernethy. 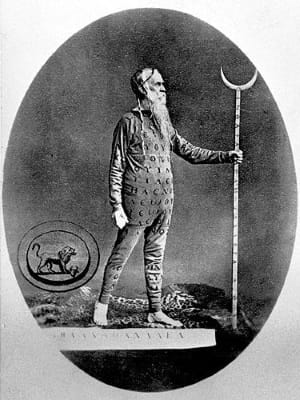 By all accounts he was a very singular man. A man who quit Wales for Paris dressed as a woman, while the law hunted him for protesting for social reform. A man who had a habit of walking through the Welsh valleys naked, reciting poetry. A man who asked for champagne with his dying breath, instead of his usual tipple, cider. This was Dr William Price. He was definitely an original, with his foot-long beard, the self-styled “Archdruid of Wales”. He dressed in bright colours and always sported a sash, a sword and a hat made from the whole pelt of a fox. It was said that he never went anywhere without his best friend, a bull called ‘Morgan’.

His views were controversial and at times divisive. He would refuse to treat a person who smoked. He was vegetarian and his powers as a healer focused on holistic medicine and prevention. He didn’t believe in vaccination and operated infrequently, though he was known to be a skilful surgeon.

He also espoused free love, believing that marriage for women was a form of enslavement. A like-minded friend is said to have fathered 28 children in the local area! William appears to have been less active in living out this philosophy but he did marry (with druidic rites) his 22 year-old housekeeper when he was himself over 80 years of age. 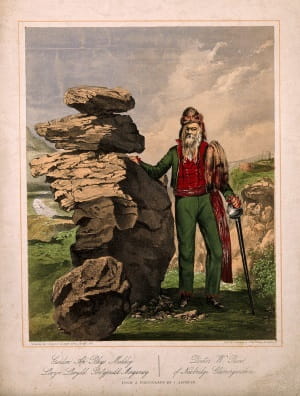 Did he really attend a conference in London and get talking to Karl Marx in a Soho pub? It could have been one of his tall tales. He claimed, during his self-imposed exile in Paris, to be on friendly terms with King Louis! However he also claimed to know that Plato was from Yfan and had built Caerphilly castle.

What he’s most remembered for, in fact, is a surprisingly far-reaching legacy: his support for the legalisation of cremation in the United Kingdom. The controversy following the inquest into an incident in 1884, when he chose to cremate rather than bury his infant son, precipitated a wide-ranging debate on the issue in the UK. After being found not guilty of infanticide, he argued in court that whilst the cremation was not legal, it was also not specifically illegal. The judge agreed and the case against Price collapsed. Ultimately this set in motion a series of local acts that led to the right to cremate being enshrined in law from 1902. 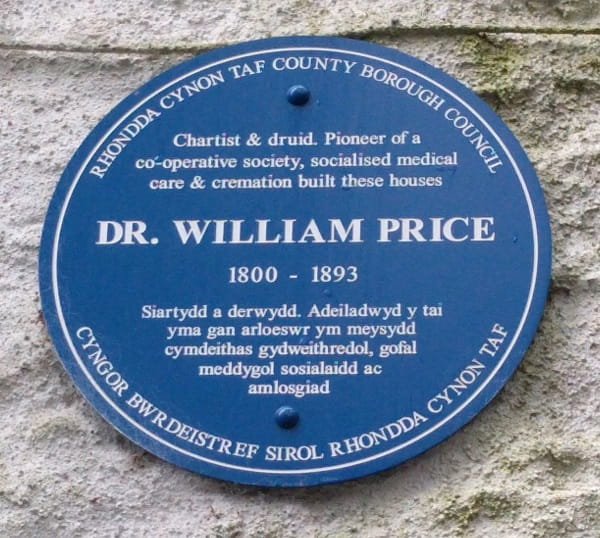 “It is not right that a carcass should be allowed to rot and decompose in this way. It results in a wastage of good land, pollution of the earth, water and air, and is a constant danger to living things.” William Price.

Dean Powell (.DOC file) argues that the many colourful anecdotes about Price actually mask his brilliance “History is not kind to Price; he’s remembered first and foremost only as the man who pioneered cremation…[but] he was basically a brilliant scholar, an exemplary surgeon, a political activist, who pioneered the embryonic National Health Service in South Wales. He launched the first Co‑operative Society in our principality. Tried to erect the first Museum of Welsh Life…also to re‑establish our national festival, our Eisteddfod, and fought hard for the striking miners and iron workers of the South Wales valleys. Those are the aspects of Price’s life you never get to hear about. There is also this element…calling him a mad man on a bad day, or eccentric on a good one.”

After his death, his family followed his wishes and his own cremation took place in 1893, attended by 20,000 people. A suitably remarkable end to a unique man.

Many thanks to Dr Ralph Vaughan for sending the Library a pamphlet authored by Dean Powell on William Price. You can read more about the debate on cremation in the UKMHL including an account of the case.