The UK, as part of the EU, has allowed freedom of movement of dentists because of a common set of professional standards, qualifications, training and competencies. While aimed at facilitating cross-border working between member states, the regulations established standards that dentists are required to meet in the UK and by the regulatory bodies, such as the GDC.

The UK government has reached an agreement with the European Union on citizens’ rights in negotiations on the UK’s withdrawal from the EU. This will provide certainty about the future to millions of EU citizens and their families in the UK. Most importantly, it will allow you to stay here after we leave the EU on 29 March 2019, and to continue to access public funds and services.

Note 1: We are in discussions with Norway, Iceland, Liechtenstein and Switzerland about securing the status of their citizens who are resident in the UK, and UK nationals resident in those states. As the rights of British and Irish citizens in each other’s country are rooted in the Ireland Act 1949, Irish citizens won’t need to apply for settled status.

More information is available on what UK nationals travelling and living in Europe need to know.

Agreement on rights for EU citizens and their families

The agreement we have reached for EU citizens and their families is:

EU citizens with settled status or temporary permission to stay will have the same access as they currently do to healthcare, pensions and other benefits in the UK.

More information is available in the joint report about the agreement reached between the UK and the European Union on citizens’ rights.

See our case studies for examples of how individual EU citizens’ status in the UK will be affected by the UK’s exit from the EU. 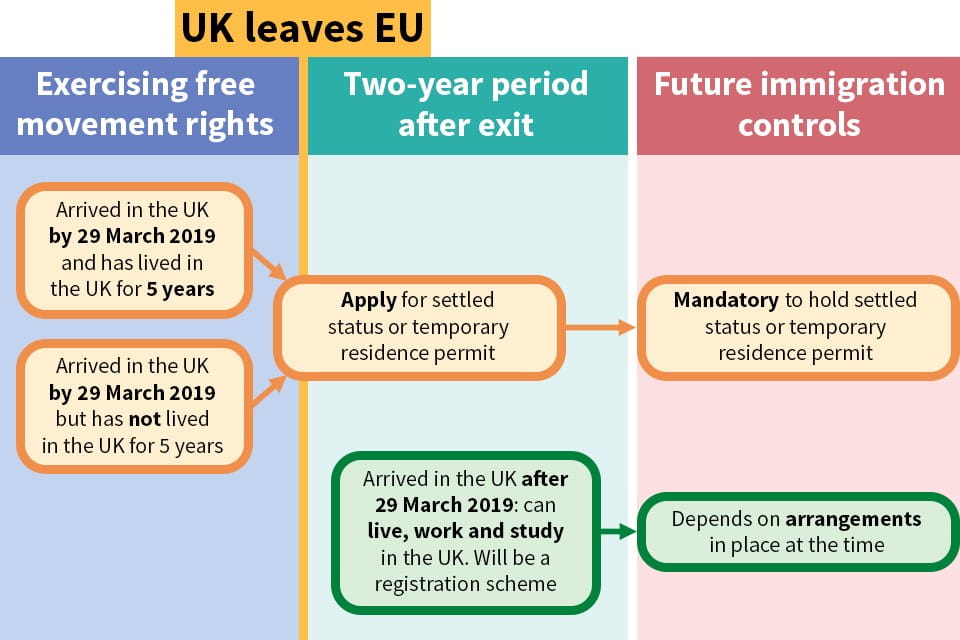 You’ll be able to apply for settled status if you’re a citizen, or the family member of a citizen, of an EU country. We’ve agreed with the EU that the conditions for EU citizens and their family members to get settled status in the UK will be the same as, or more generous than, those set out in the existing Free Movement Directive. In most cases this means you will need 5 years of continuous and lawful residence in the UK. The criteria will be set out in the withdrawal agreement between the UK and the EU.

If you meet the criteria and submit a valid application you will be granted status, unless:

The withdrawal agreement will become a part of UK law and so the Home Office will not be able to refuse an application for any reason not covered by the agreement.

More information on our proposed procedures for processing settled status applications is available (in English).

Note 2: Unless you’re a close family member of an EU citizen living in the UK but were living outside the UK when the UK left the EU.

EU citizens and their family members in the UK will need to apply to get their status document. Getting this status will prove (for example, to employers or public service providers) that they have permission to continue living and working here in future.

The application fee will be no more than the cost charged to British citizens for a UK passport. If you already have a valid permanent residence document, it will be free.

We’re making the application process as streamlined, quick and user-friendly as possible. We’ll use existing government data to reduce the amount of evidence you will need to provide. For example, HMRC’s employment records will show us your UK work history.

As an EU citizen applying to the scheme, you will need to:

You won’t have to:

We expect the online application form to go live in late 2018. Sign up for email updates for more details.

The Home Office will provide support to ensure your application isn’t turned down because of simple errors or omissions. We will contact you where it appears a simple omission has taken place and help you fix it. We will also let you know if you need to provide more evidence, before a decision is made.

So people have enough time to apply, the scheme will remain open for applications for a considerable period, at least 2 years, after the UK leaves the EU. During this period your rights in the UK will be protected. If you apply under the scheme, but don’t receive a decision before the end of this period, you can continue living here until the decision is made.

Note 3: In some circumstances, comprehensive sickness insurance is still required for the purposes of accessing the healthcare system in the UK, but will no longer be considered as a requirement for acquiring settled status.

While the UK remains in the EU you don’t need to apply for a document to prove you can live in the UK unless:

A permanent residence document confirms that you have rights under European law. In the future, EU law will no longer apply and the migration and status of EU nationals will be subject to UK law.

There will be a simple process for you to exchange this for a settled status document free of charge and we won’t repeat any assessment of residence.

You will need to:

Sign up for email updates for more details of when you’ll be able to apply to stay in the UK under the new settled status scheme and what steps you’ll need to take.

Indefinite leave to remain status will not be affected by the UK leaving the EU.

Once the application scheme for settled status opens there will be a simple process for you to exchange your old indefinite leave to remain document for a settled status document free of charge, should you wish to prove you benefit from the withdrawal agreement. We won’t repeat any assessment of residence.

You will need to:

You can apply for a biometric residence permit if you want an updated document confirming you have indefinite leave to remain now.

EU citizens who arrive in the UK after EU exit

After the UK has left the EU on 29 March 2019 there will be an ‘implementation period’ of around 2 years to prepare and implement our future arrangements with the EU.

EU citizens and their family members who arrive in the UK during the implementation period will be able to live, work and study here as they do now, but they’ll need to register with the Home Office if they intend to stay here longer than 3 months. We will publish more details about this registration scheme as soon as possible.

We propose that the following arrangements should apply to EU citizens and their family members who arrive in the UK (and have registered) during the implementation period and who want to stay afterwards:

These arrangements are separate from the settled status scheme available to EU citizens lawfully living in the UK before 29 March 2019.

Irish citizens won’t need to register or apply for leave to remain.

More information is available on EU citizens arriving in the UK during the implementation period.

For EU citizens arriving after the implementation period ends, we’re carefully considering a range of options for the future immigration system and will set out our plans in the coming months. To be kept up-to-date with the latest information sign up for email updates.