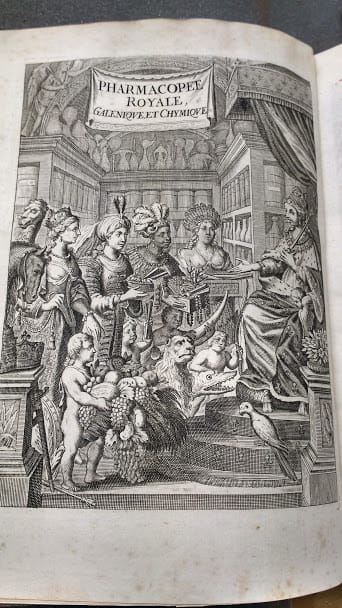 Born on this day (2 April) in 1619, Charas was an apothecary in France during the reign of Louis XIV. A pharmacist born in Uzès, he studied chemistry at Orange, then Paris, where he was appointed demonstrator in chemistry at the Jardin royal des plantes médicinales. His writings feature alchemical theories.

His pharmacy was born out of lectures he had given in Paris and his research. The Pharmacopée royale, galénique et chymique (1676) was a success, reprinted many times and translated into European languages and Chinese so that it could be added to the library of the Emperor. There are descriptions of many pharmaceutical preparations. The frontispiece is a beautiful allegorical engraving showing the Royal Pharmacopeia personified as a figure seated on a throne clothed in a fleur du lys fabric; the symbolism attached to this pattern was usually connected to the Virgin Mary but was also associated with the Trinity and with faith, wisdom and chivalry. The four figures presenting plants, animals and minerals used in the remedies are also personifications of four continents, from left to right: Europe, Asia, Africa and America.

Europe is richly dressed and wears a crown, beside her stands a child offering a cornucopia of botanical treasures and a horse; Asia sports a turban and jewels and offers a basket of minerals, flanked on one side by a camel; Africa holds a casket full of coral and precious stones, at her feet a child offers an elephant tusk and a lion and crocodile are also looking on; the figure representing the last discovered continent of America wears a native feathered head-dress or war bonnet, the child at her feet holds a bow and in her arms she carries a box of undefined gifts – perhaps reflecting the unknown nature of the resources available in the Americas?

The background of this busy scene shows the practical tools of the pharmacist: tools for preparing distillations together with well-ordered bottles and containers. Despite the title showing an adherence to Galenical medicine the images and implied symbolism here demonstrate a move away from reliance on classical, religious and philosophical thinking to inform chemical and pharmaceutical practice, they show how evidence and careful experimentation done by the individual are the new ways to innovate in the field.